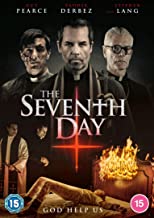 The Seventh day written and directed by Justin P. Lange (The dark), he brings us his second feature horror, with the dark and dangerous lives of the Vatican sanctioned exorcist. This time the possessor has a big plan, it’s the expert and the novice out to save the planet from the dead.

Baltimore Maryland 1995 and the Pope is visiting, as seasoned priest Father Louis (Keith

David, The Thing, Pitch Black) and first time out priest Father Peter (Chris Galust, Give Me Liberty) come to their current possession of Nicholas Miller (Tristan Riggs, Thunder Road), a young boy strapped to his bed. Mr Miller (Heath Freeman, The Wicked Within) and Mrs Miller (Hannah Alline, Tulsa) look on as the forthright Louis goes about the task of banishing the evil spirit with Peter assisting with the rite.

Father Louis thinks he has done the job, but his parents think he has killed him as he has gone still and they start to accuse Louis of murder. Suddenly Nicholas suddenly pipes up in a very non child-like voice. He starts affecting things around him, especially his mothers’ crucifix which ends Father Louis’s life. He gets it lightly compared to the end of Nicholas, which his parents and Peter witness as does the world, so the Vatican and the church move away from public exorcisms.

Present day and Father Daniel (Vadhir Derbez, The Waiter, How to Be a

Latin Lover) sits nervously outside the Archbishops (Stephen Lang, Avatar, Tombstone) room. Inside is Father Peter, a priest that has been tirelessly doing exorcisms for the Vatican ever since that fateful day in 95. 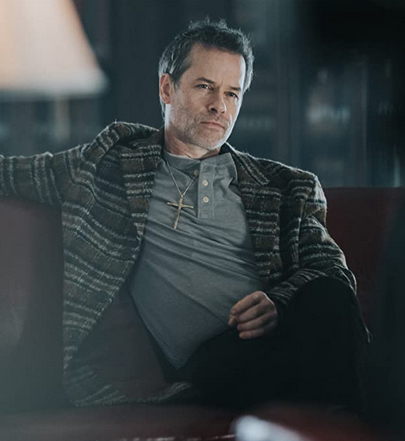 Father Peter is now a hardened veteran of the spirit world, and today he is to take father Daniel under his wing and train the young priest in the true art of exorcism, the things that the Vatican’s school of exorcism can’t teach, to counter the huge rise in demonic possession across the country. Father Peter has over the intervening years trained many a Father in the art of exorcisms, and he doesn’t seem that impressed with the quiet Daniel.

What’s wrong with my clothes? – You look like a priest!

With some preamble training trying to get Daniel to use his senses to seek out demons, with various amounts of success, Peter thinks that Daniel might be of some use in a new case.

How can you exorcise a demon, if you can’t find a demon?

A new case of a young boy Charlie (Brady Jenness, The Trial of the Chicago 7) has killed his mother (Stephanie Rhodes, Friday the 13th), Father (Major Dodge, Soul Frackers) and sister Nellie (Evangeline Griffin, Colt 45 (Short)), but remembers nothing of the act. He now resides in a prison cell with the psychologists about to declare him criminally insane, they must uncover Charlie’s true story, and Peter thinks that Daniel should investigate their house where the murders occur.

The Seventh Day is an intense chiller with Guy Pearce leading from the front as he gives an affirmed performance as Father Peter, and you’ll believe Vadhir Derbez is going through hell to save the young Charlie. A great viewing for the supernatural fan.

The Seventh Day is available on DVD