4 stars for this enjoyable horror with a great twist. 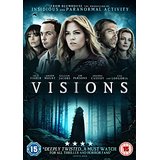 Visions is directed by Kevin Greutert (Saw IV, Jessabelle) and is produced by Blumhouse, the producers of Insidious: Chapter 3 and The Gift.

Eveleigh Maddox (Isla Fisher – Now You See Me, Life of Crime), a young mother to be, has just moved with her husband David (Anson Mount – Line of Fire) to join him in living his lifelong dream of running a vineyard. 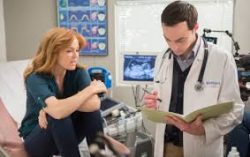 Eveleigh is still recovering from a car crash a year previously, in which a baby in the other car was killed. She has now come off her medication, against the advice of her doctor (Jim Parsons – Big Bang Theory) but everything seems to be going well.

However, it isn’t long before she begins to notice strange occurrences around the house and it’s grounds. 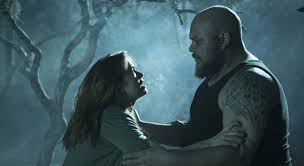 She soon comes to believe that the property is haunted, but no-one else can see or hear what she can.

They also have a very odd encounter with the local wine buyer for the valley, Helena (Joanna Cassidy – Blade Runner, Chain Reaction), who they find in their bedroom at their housewarming party, seemingly in some sort of trance. 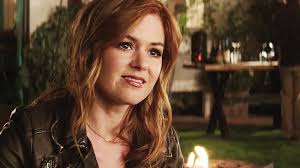 She starts attending local pre natal yoga classes, which is where she meets new friend Sadie (Gillian Jacobs – The Box, Walk of Shame). Having someone to confide in is good for her and Sadie thinks what she is experiencing is probably due to her pregnancy making her more sensitive.

Her investigations with the locals begin to build up a picture of what is going on, but the truth is very different and much more scary than she ever imagined. 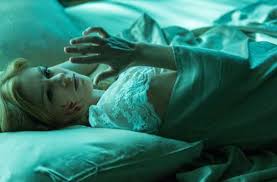 Visions is a very enjoyable watch, the acting is good, with a fine cast, also including Eva Longoria (Desperate Housewives) and John De Lancie (Star Trek: The Next Generation). There are plenty of pretty good jump scares and it is certainly creepy.

The story is well written with a twist that sets this otherwise run of the mill haunting story apart from the rest.

Well worth a watch if you’re into horror, great for an evening in front of the TV.

“Something happened on this property. Something so terrible it stained the land.”

Visions is available to buy on DVD and digital from 27th June 2016.