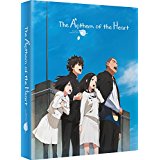 The Anthem of the Heart (Beautiful Word, Beautiful World) is a Japanese animation directed by Tatsuyuki Nagai (Toradora!) and produced by anime studio A-1 Pictures (Your Lie In April, Sword Art Online).

“Daddy’s a prince! Of course the princess wasn’t you, but… did you miss the ball because you were cooking?”

Jun Naruse (Inori Minase) is a happy go lucky young girl, full of life and well known for her talkative nature. Her favourite place is the castle at the top of the mountain, which she dreams of visiting, to be a princess dancing at a grand ball with a handsome prince.

One day, while standing at the gates, she sees her father leaving the castle in a car with a woman she doesn’t recognise. Too young to understand that the castle is in fact a love hotel, she runs home and excitedly tells her mother (Yo Yoshida) about what she has seen.

Unsurprisingly, shortly afterwards her father moves out and as he is leaving he tells her that it is all her fault for being such a chatterbox. In her grief, an Egg spirit visits her and tells her that she must now seal away her voice so that she can never hurt anyone else.

Several years later and Jun is now at school. No-one in her class has ever heard her voice, until one day their teacher (Keiji Fujiwara) nominates her to be part of the Community Outreach Committee, in charge of putting on a show for the local residents. Also chosen are Takumi (Koki Uchiyama), a charming young man, Natsuki (Sora Amamiya), his ex girlfriend and Daiki (Yoshimasa Hosoya), who was the ace of the baseball team until blowing out his elbow.

Daiki and Jun want no part of it, but Takumi persuades Jun to go ahead, and eventually they manage to get the rest of the class on board, writing a musical to perform and encouraging both her and everyone else to find their voices and learn to express their innermost feelings.

The Anthem of the Heart is a lovely film to watch. The animation style is beautiful, detailed and colourful and sets the scene perfectly.

The story is well written, dealing with sensitive issues and offering a candid insight into mental health problems in young people.

The introduction of the musical element is also inspired, and draws you through the story along with the characters which leads to this being quite an emotional experience. This is a really enjoyable film and well worth adding to your collection.

“The prince bestowed upon the young girl, who’d filled herself with sorrowful words, extremely precious words of bliss, like water seeping into the desert.”

The Anthem of the Heart is available to buy now on Dual Format DVD and Blu-ray.