4 stars for this great restoration of the original “slasher flick”. 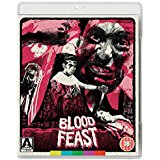 Blood Feast (and Scum of the Earth 1963) are written by Allison Louise Downe (The Gruesome Twosome, She-devils on Wheels) and directed by the “Godfather of Gore” Herschell Gordon Lewis (Colour Me Blood Red, Two Thousand Maniacs!).

It was released in 1963 along with the other film featured on this release, Scum of the Earth, a sexploitation drama, and gave birth to an entire genre of horror, the very popular slasher flick.

“A pathological killer on the loose and we can’t find a single clue. This man’s uncanny..” 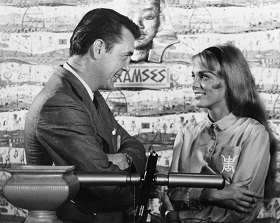 It is a very simple yet effective concept. Dorothy Fremont (Lyn Bolton – Sweet Bird of Aquarius) wants to throw her daughter Suzette (Connie Mason – The Rolling Man) a dinner party she will never forget.

To help make that happen she goes to a local exotic goods shop, belonging to Fuad Ramses (Mal Arnold – Vampire Cop). He is extremely eager to be of assistance and agrees to present an authentic Egyptian Feast, such as has not been seen for five thousand years. 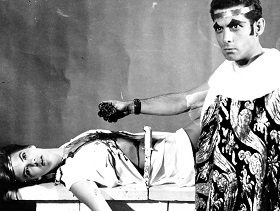 Unfortunately, he is a follower of the Goddess Ishtar, worshipped by a cult who believed that she could be resurrected by harvesting and eating body parts of nubile young ladies.

He goes about the gruesome business of acquiring said body parts, with gleeful and bloody abandon, while the Police Captain (Scott H. Hall) and his inept helper Det. Pete Thornton (William Kerwin – Absence of Malice) try to work out his identity before more women are brutally killed. 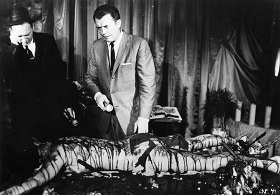 Blood Feast is not sophisticated in its production values and Herschell Gordon Lewis himself is the first to admit that it does not have a great script or acting or even elaborate sets. But that is not what this was about. It was about trying out an entire new type of filmmaking and in that regard it was in every way a triumph.

There is gore aplenty, the subject matter is disquieting and it remains to this day a must own for any self respecting splatter fan. It is presented here as a double feature with Scum of the Earth (itself somewhat controversial upon release, although not so much now) courtesy of Arrow Video and comes with a host of special features. Well worth adding to your collection.

“An authentic dinner, such as one might have attended in ancient Egypt, the actual feast of an ancient Pharaoh. It has not been served for five thousand years…”

Blood Feast is available to buy now on Dual Format DVD and Blu-ray.