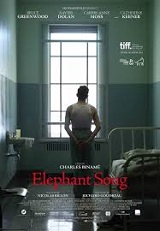 Elephant Song is written by Nicolas Billon and directed by Charles Binamé (Being Human, Cyberbully). It stars upcoming actor Xavier Dolan, whose eagerly awaited film Mommy (winner of the Cannes jury prize), which he wrote and directed, is due for release soon.

The premise of the film is very simple, a psychiatrist, Dr. Lawrence (Colm Feore – The Chronicles of Roddick, Thor) has gone missing during a session with one of his patients, Michael Aleen (Dolan – I killed My Mother, Heartbeats) and the hospital director Dr. Toby Green (Bruce Greenwood – Good Kill, Devil’s Knot) is called in to speak to him and try to find out what happened during that hour. 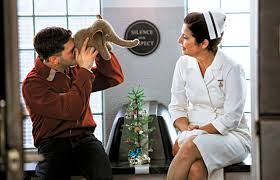 Everything is presented in the form of flashbacks, as we see interviews with both Dr. Green and Nurse Peterson (Catherine Keener – Begin Again, Captain Phillips) conducted under recording by Dr. Craig Jones (Guy Nadon – H20, Frail), a fellow psychiatrist.

Dr. Green is extremely confident in his ability to get the information he needs, but he has yet to meet the patient. Michael loves to play games and against all warnings given to him, most notably from nurse Peterson, who knows him better than most, he allows himself to be drawn into a mind game that he cannot hope to win.

Dr. Green also has plenty of other issues to deal with. His other half Olivia (Carrie-Anne Moss – The Matrix, Memento) is very needy and uniquely unsuited to look after his niece Amy, who has been placed in her charge and he is haunted by his past.

As Michael talks of elephants and abuse and opera and his parents, Dr. Green slowly reveals yet more ammunition to be used against him. 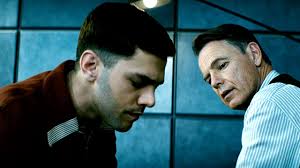 Elephant Song is well written, with an excellent script, made better by standout performances from each of the leads. Xavier Dolan perhaps overdoes it a little at the start, missing menacing by trying a bit too hard, but as he settles into the part the tension does start to ramp up.

The character interactions are very interesting and there are plenty of twists and turns. For some reason however, the ending doesn’t have quite the impact I was hoping for, it goes off the boil slightly before it gets there.

All in all though, this is a very good film, not for casual popcorn watching, but ideal for when you are feeling a little more introspective.

“I know you would, but my job here is to be crazy. That’s why I get free bed and board Dr. Green. Giving you a straight answer does not fall within my mandate of lunacy.”

Elephant is available On Demand from 13th July 2015.