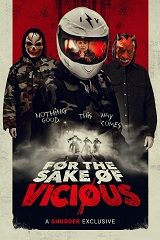 For the Sake of Vicious is a blood soaked and brutal affair, written and directed by Reese Eveneshen (Defective, Dead Genesis) and Gabriel Carrer (The Demolisher, In the House of Flies). It is a Shudder exclusive, available to stream from 6th January 2022.

“I don’t know what he has told you, but you’re only getting one side of a very complicated story, told to you by a very sick individual.” 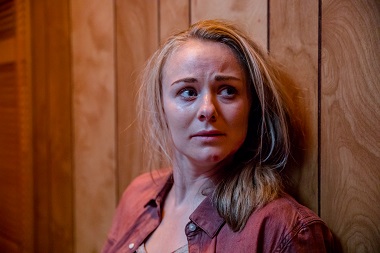 Romina (Lora Burke – Motherly, Poor Agnes) is a long suffering nurse, heading home after a long shift on Halloween. She’s expecting to collect her son and take him trick or treating, but her plans are rudely interrupted by the presence of two men in her home.

One of the men is known to Romina, he is Alan (Colin Paradine – Inspiration, Kingdom Come), her landlord. He is currently being beaten senseless in her kitchen by Chris (Nick Smyth – Covenant, Survival), who believes him to be guilty of a heinous crime against his family. Romina was the nurse who attended, hence his choice of her house for his efforts (or is it because Alan is her landlord? We’re not sure). 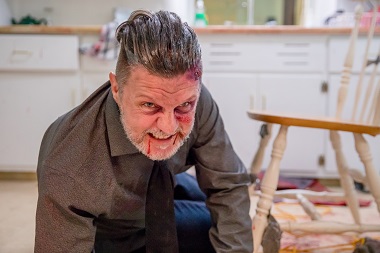 Romina attempts to mediate and allows Alan to make a call which he says will end the situation , the police might have been a good choice at this point. Alan, however, has a better idea and calls a guy in a suit who appears to be in charge of a motorcycle gang. Before you know it, more people in masks and waving a variety  of weapons come pouring into the small suburban house, sparking a bloody and brutal free for all. 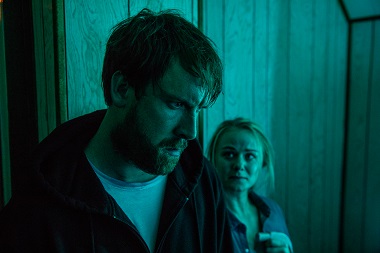 For the Sake of Vicious is a very intense film and absolutely not for the faint hearted. The gratuitous violence is extreme and actually cringe-worthy in places, escalating into an all out opera of blood, involving knives, guns, pots and pans and a toilet tank lid, amongst other things.

The story is thin at best, but the acting is actually quite good and Nick Smyth brings some Nicholas Cage-esque wide eyed gurning to the fight scenes which adds to the entertainment factor. 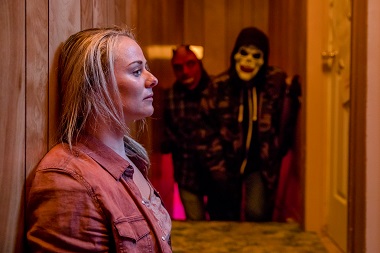 It is also easy to understand the motivations of his character, if not his enthusiasm later on. The effects are also excellent and very well done, which is great as they seem to be the only point of this film.

It’s full of plot holes and is poorly explained, but in terms of violence, blood and brutality it should satisfy the most die hard of gore fans. If you enjoy mindless and unrelenting violence then this one is well worth streaming,

For the Sake of Vicious is available to stream on Shudder from 6th January 2022.