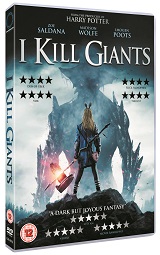 I Kill Giants is written by Joe Kelly (Ben 10, Ultimate Spiderman), based on his graphic novel of the same name and directed by Anders Walter (Helium, 9 Meter).

“I’m here because people fear what they don’t understand. I’m good with that so we’re done here.” 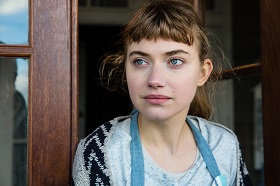 Barbara Thorson (Madison Wolfe – The Conjuring 2, Joy) is an independent teenager who lives with her angry brother and supportive older sister Karen (Imogen Poots – Green Room, 28 Days Later), who is struggling in her role as head of the family.

Barbara has created a fantasy world inspired by her love of Dungeons & Dragons and the career of former Phillies pitcher, Harry Coveleski. Believing that giants from other worlds are coming to attack her hometown, she spends her days creating weapons and traps to fend off the creatures. 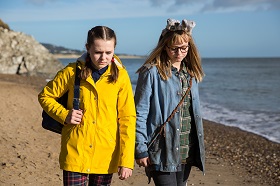 One day, Barbara meets Sophia (Sydney Wade – The Damned United, North v South), who just moved to the area from Leeds, England. Sophia expresses an interest in getting to know Barbara, but Barbara initially remains aloof, too busy with her fantasy world.

A confrontation between Barbara and a group of bullies led by Taylor is interrupted by Barbara being called by the school psychologist, Mrs. Mollé (Zoe Saldana – Guardians of the Galaxy, Avatar). Barbara leaves the ensuing meeting abruptly, declaring that their talk would just distract her from her preparations to battle a giant.

Later, Barbara explains the mythology behind the giants to Sophie. She shows Sophia the baits and traps she created to lure and trap giants, and tells her about the magical warhammer, Coveleski, which she keeps in her handbag. She also tells Sophia about Harbingers, ghostly creatures that warn her when there is a nearby giant.

After Barbara is given detention by the principal for insulting a teacher, she takes Sophie with her on her hunt for a giant. Sophia begins to doubt Barbara’s claims about the giants and starts to realise that she needs help. Together she and Mrs Molle must try to help her to face her fears. 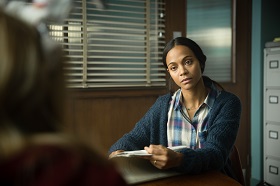 I Kill Giants is a very well written story, which handles delicate subject matter in a thought provoking and emotional way. It does require some patience as nothing is really explained until right at the very end of the film, but it’s well worth the wait, just be sure to have some tissues at the ready.

The CGI isn’t the best, but that isn’t really what this film is about anyway and they do get the point across. This is a film with which many young people will identify and is well worth adding to your collection.

“If you don’t walk away right now, I’ll do things to you that will make God cry.”

I Kill Giants is available to buy now on DVD.