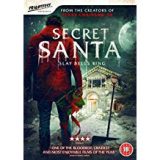 Secret Santa is the second film from the Frightfest Presents label, a venture between Signature Entertainment and leading genre festival Frightfest. Following the success of The Dark, we now have a blood drenched comedy from the creators of Jason Goes to Hell: The Final Friday and Texas Chainsaw 3D.

It is written by Debra Sullivan (Momentum) and Adam Marcus (Conspiracy, Let It Snow), who also directs. 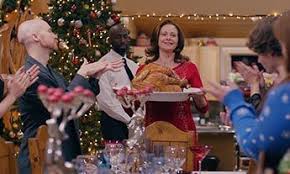 April Pope (A Leslie Kies – NCIS, Totally Megan) is full of good intentions. It is her turn to play Secret Santa at her family gathering this year and she has made certain to invite absolutely everyone in an attempt to bring her dysfunctional family together. She brings her new lawyer boyfriend Ty (Michael Rady – UnREAL, Timeless) with her and although he believes she is exaggerating he soon changes his mind when he meets her horrible mother Shari (Debra Sullivan).

Soon the family are all there including her brother Kyle (Drew Lynch – Cassandra French’s Finishing School) who stutters and constantly has his sentences finished by Shari and her sister Penny (Ryan Leigh Seaton – Dogs and Me), who is overweight, not much to look at and resents her good looks and handsome boyfriend. 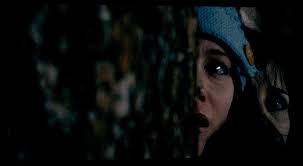 Also present are Carol (Pat Destro – Exit in Red The Practice), their Auntie and somewhat awkwardly Leonard (John Gilbert – The Moment After), father to the children and estranged from Shari after sleeping with Carol.

This already sounds like a bad idea but add in Shari’s famous punch, spiked with untested weapons grade Sodium Pentathol plus three very fed up catering staff and you have a recipe for blood soaked disaster, with skeletons popping out of closets left, right and centre and some very inventive uses for the festive cutlery. 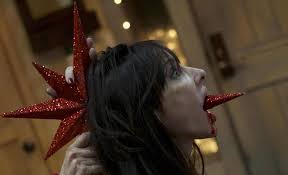 Secret Santa is a very entertaining film, an ideal stocking filler for the gore-hound in your life who is suffering from Halloween withdrawal symptoms. Packed with blood, guts and festive cheer it is the blackest comedy I have seen for a while, funny even when you know it shouldn’t be.

With it’s dysfunctional but expressive family, this is a must watch for anyone who hates fake Christmas get togethers. A great effort and I am really looking forward to the next offering from Frightfest Presents.

“Wait a second. That’s the same as the book Shari gave Jack. Is that about lesbians also? What’s going on with you people?!” 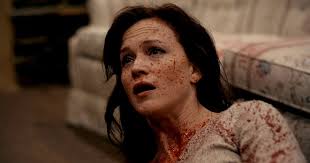 Secret Santa is available to buy now on DVD and Digital Download.