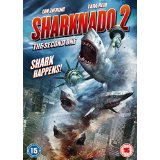 After their adventures in the first film, this one sees our heroes, Fin Shepard (Ian Ziering – Sharknado, Elopement) and his estranged wife April Wexler (Tara Reid – Sharknado, The Big Lebowski) on a plane heading for New York to promote April’s new book, “How To Survive A Sharknado”. 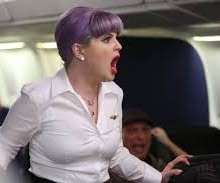 This does not, of course, go to plan and soon Fin is having a twilight zone moment while looking outside the plane when he sees a shark hit the wing of the plane. True to form, they have indeed managed to fly into a Sharknado, even worse apparently in a plane than on the ground. Magnificently, one of the air hostesses is played by Kelly Osbourne (The Osbournes) and one of the passengers is Wil Wheaton (Star Trek: The Next Generation).

Not deterred by the imminent crashing of the plane or the quantity of sharks on board, Fin calmly lands the plane, only to discover that April has had her hand bitten off while trying to shoot a shark.

While at the hospital, they begin to realize the horrible truth, there is a Sharknado heading directly for New York City (makes a change from Los Angeles) and only they know how to defeat the sharks.

There then begins a race against time to warn and rescue the people they love. Fin’s sister Ellen (Kerry Wuhrer – Eight Legged Freaks, Anaconda) is sight-seeing on Liberty Island with her daughter Mora (Courtney Baxter – Hallows Eve) and her husband Martin (Mark McGrath – Scooby-Doo) and their son are at a ball game, not to mention the fact that his ex-girlfriend Skye (Vivica A. Fox – Independence Day, Kill Bill Vol. 1 & 2) is also there. This really must be the unluckiest family in the world. 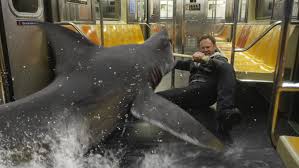 There is plenty of fun to be had here, with lots of romping around the streets of New York and the Sharknado (now officially titled as such by the weather reporters!) causing all manner of havoc, with landmarks being destroyed left right and centre and sharks appearing in the most unlikely places.

There is a great guest appearance from Judd Hirsch (Independence Day, Numb3rs) who makes an excellent New York cabbie, plus lots and lots of cameos, including Stephanie Abrams, Kelly Ripa, Matt Lauer and Michael Strahan, all as themselves. 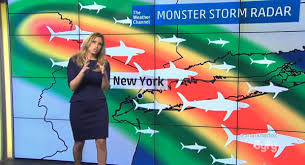 Clearly loads of people loved the idea of the first film and wanted to get involved in the sequel. They look as though they had a better budget for this one, although the sharks are still rubbish, but watch the special features and you’ll see why! The special effects are actually quite good in places and certainly more ambitious.

The main endearing factor though is that everyone seems to be having so much fun making it that it’s brilliant to watch. Much better than the first film on so many levels, it takes itself far less seriously and as a consequence is much better viewing.

Top notch popcorn munching flick this one, now that’s how you do a B-movie! 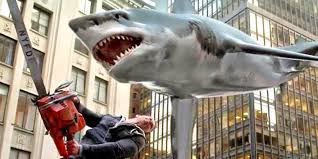