2 stars for this poorly executed but novel take on the vampire legend. 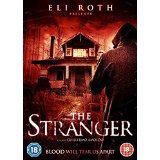 The Stranger is written and directed by up and coming director Guillermo Amoedo (Knock Knock, The Green Inferno) and produced by Eli Roth (Aftershock, Cabin Fever).

Set in the small quiet town of Grey Mountain, The Stranger starts off incredibly slowly and pretty much stays that way for the rest of the film. 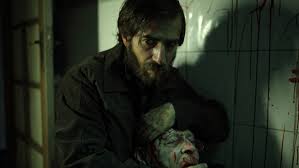 He arrives at the home of Peter (Nicolás Durán) and his mother Monica (Alessandra Guerzoni – Igloo, Graduado), where he believes that he will find her (how he knows where to look is never explained), however Peter tells him that she is longer there, she has passed away. 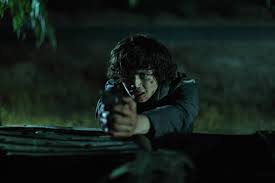 As he grieves quietly on a park bench, he becomes lost in a flashback of the events of 16 years previously, when he first saw his wife drink the blood of a human and realised she was infected with a terrible and highly contagious disease which he too carries.

After he is brutally attacked by three local youths, the leader of whom, Caleb (Ariel Levy) is the son of the local cop De Luca (Luis Gnecco), he is found by Peter and taken back to their home, where he sternly warns them not to touch his blood.

This sets in motion a chain of events which will plunge this sleepy and peaceful town into the world’s most tedious and long drawn out bloodbath ever. 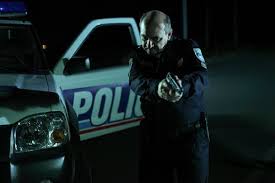 It is an interesting idea, and it could have been so much better than it is. The acting is for the most part absolutely atrocious. It is very clear that some of the actors don’t even understand what they’re saying, as if they’re reading it straight from the script, so they had no hope of acting any of it. The only exception to this is Cristobal Tapia Montt, who is very good, but let down by a terrible script, stilted and badly written.

There are also issues with the storyline, which is vague and poorly explained and never misses an opportunity to contradict itself. If you are into the type of mindless brutality which Eli Roth always provides and you don’t mind waiting half an hour in between action sequences then you might enjoy this, otherwise I wouldn’t bother.

“I hope you’ve inherited your mother’s strength, otherwise hell will be waiting for you out there.” 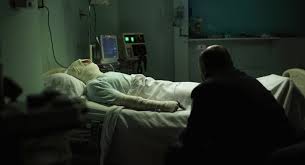 The Stranger is available to buy on DVD now.