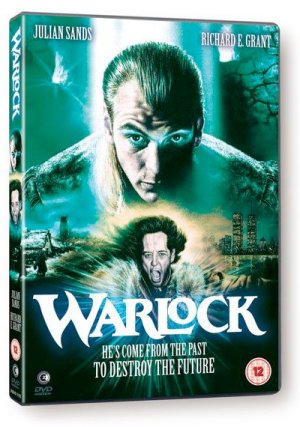 The 80s’ cult classic supernatural action-adventure arrives on DVD! I have given this film 3 stars, maybe a little low, but it does look slightly dated.

For those among you who are too young, or simply missed this the first time around, this film was first released in 1989, and stars Julian Sands (Naked Lunch) and Richard E. Grant (Withnail and I).

This is a classic piece of 80s sci-fi/fantasy film making, and it’s pretty much guaranteed that if you are a fan of the genre you will love Warlock.

Julian Sands and Richard E. Grant both put in sterling performances as the 17th century Warlock, at loose in the future, and his relentless pursuer, the witch-finder attempting to stop him from destroying humanity. The story is well written and very enjoyable, and the casting is inspired, and although it is very much of its time, it still stands up quite well today.

The only thing which I found really disappointing about this DVD conversion is that little or nothing has been added. There does not appear to have been any form of remastering, and the disc contains no special features of any kind, only an interactive menu. Having said that, it does not appear to have suffered in any way due to the switch to DVD. The special effects all still work and look the way they were intended to, so if you love the film, or just fancy a bit of retro 80s action, then this one is well worth a look!

Warlock is now available to buy on DVD