3 stars for this old school but rather weird haunted house tale. 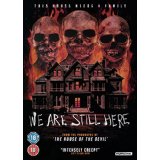 We Are Still Here is written and directed by Ted Geoghegan (The Berlin File, Sweat Shop) and enjoyed its premiere at Frightfest UK.

It is very much in the style of late seventies/early eighties horror films, but happily without the Mary Whitehouse effect removing the horror and replacing it with comedy. 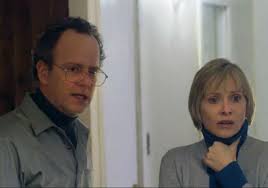 To try to escape their grief, they leave the city and head for the cold wintery landscapes of New England, where they have purchased a lovely but relatively remote house. It seems very nice, but Anne begins to experience strange phenomena and believes that Bobby is trying to contact them and that he is in the house.

They also receive a rather strange visit from their neighbours Dave (Monte Markham – Combat at Sea, Baywatch) and Cat (Connie Neer) which is very cryptic, they tell them all about the Dagmars, the previous owners who were run out of town and it all culminates in a rather hysterical Cat giving Paul a note which reads “This house needs a family, GET OUT”. 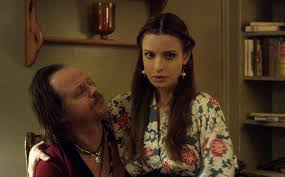 In order to shed some light on the situation, they decide to invite some old friends over, Jacob (Larry Fessenden – POD, I Sell the Dead) and May (Lisa Marie – Sleepy Hollow, Mars Attacks!) who have an interest in the occult.

However, this is a house of many secrets, not only are the Dagmars still there and hungry for revenge, but there is also an older, more deadly power residing beneath the house, which may well be best left undisturbed.

We Are Still Here is an entertaining film, plenty of tension and occasional gouting and blood and guts. These moments are a little bit too few and far between for my taste, however it does benefit from modern special effects, which are really good and genuinely quite scary at times. 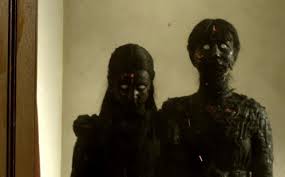 It also seems to have taken on a little bit too much, storyline wise. Previous occupants still present or ancient evil beneath the property, they could have just picked one of those and made the whole affair a bit less confusing. Another thing I found odd was that everyone seems to be burning, even though the house is wooden and clearly still standing. This is never explained.

All that aside though it is a very enjoyable watch as long as you don’t overthink it and it is very nice to see a proper 18 certificate horror film for a change.

“I’m so sorry. Here I am with you nice folks no more than five minutes and I’m already knee deep in demons. She’s an old, old house, this one.” 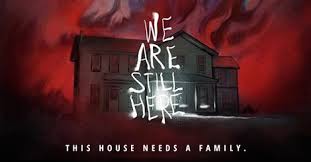 We Are Still Here is availble to order now and will be released on 19th October 2015.