4 Stars for a difficult time in American History 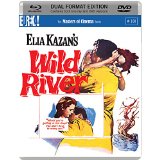 From Eureka! and The Masters of Cinema comes #108 in their Blu-ray, DVD Dual Format release, done in wonderful 1080p.

From the director that brought us Boomerang!, A Streetcar Named Desire, A Man on a Tightrope, On the Waterfront, East of Eden Elia Kazan comes his 1960 film about the taming of the Tennessee river, to stop the annual devastating floods that destroyed towns and lives all along its banks.

In the 1930’s the Federal government decide that some thing must be done and so by 1933 the Tennessee River Authority (TVA) is formed as they plan on building a series of dams along the length of the river. The TVA is tasked with purchasing all the land that will be submerged and to clear the land of people, trees, buildings etc.

But there is a stumbling block, one farmer refuses to sell under any

circumstances and this has the result of two TVA men leaving, no the third has arrived and he has a short time to get the owner off their family farm before the sluice gates are closed. That man is Chuck Glover (Montgomery Cliff, Red River) and his troublesome task is to get Ella Garth (Jo Van Fleet, Cool Hand Luke) and her family along with her cotton farm workers.

In the town of Garthville at the TVA office he inherits Miss Betty Jackson (Barbara Loden, Wanda), a discovery of Kazan’s who tells Chuck all about the Garths and the Baldwins on their island in the middle of the Tennessee River and destined to be completely submerged.

With an air of calmness Chuck pays a visit to the Garth farm where he gets the frosty reception he was expecting as Ella refuses to talk to him, but he does meet her daughter Carol Garth Baldwin (Lee Remick, The Omen). With the rebuff he talks to the sons who just sit around all day doing nothing but fishing, Hamilton Garth (J.C. Flippen, The Killing) tells him that their mother will never leave the island and he ends up unceremoniously dumped in the river by Hamilton’s brother.

With Ella’s grit and determination she has no intention of making Chucks day, but Carol has different loyalties. As she seeks to provide for her two children, she looks to Chuck for solace and a possible way off the island and away from Tennessee. But Carol is betrothed to a man she doesn’t love but he would be her rock in Garthville.

It soon comes apparent that Carol is spending more time with Chuck rather than Walter Clark (Frank Overton, To Kill a Mockingbird), who makes it clear that he is not impressed with situation . With a subtle approach Chuck approaches his task from the side rather than head on and that is what makes this film stand out from others.

Cliff plays his character stalwartly as Fleet gives epic monologues to all assembled whether they want to hear it or not, whilst Remick uses her innocence and her obvious charms to protect the ones she loves.

In Beautiful Blu-ray and accompanied by a 40 page booklet with a new essay by Adrian Martin, this is a great addition to the The Master of Cinema series, put it on your shelf.