The Complex is directed by renowned director Hideo Nakata (Ring, Dark Water) and as such I was expecting great things. However, this is his first film for almost a decade and shows no sign of his former brilliance.

The film is set in an old and dilapidated Japanese apartment complex, into which Asuka (Atsuko Maeda – Seventh Code) moves with her family. 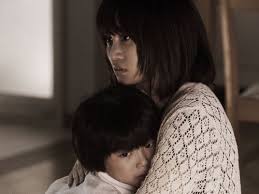 As her friends at nursing college take great delight in telling her, the complex has a reputation for being haunted and she soon begins to see the evidence of this, hearing strange scratching noises behind her bedroom wall and an early morning alarm that won’t stop.

Asuka finally plucks up the courage to enter the apartment next door, where she finds the dead body of her neighbour, who has been scratching at the wall. 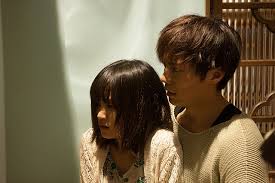 Asuka befriends the cleaning guy, Sasahara (Hiroki Nariyami – Azumi, Ace Attorney) who turns up to clear out the apartment. He is quite spiritual and tries to help her to deal with her haunting issues. Strange events begin to occur and Asuka is threatened by the ghost of her dead neighbour.

With the aid of a ten year old boy who also lives in the complex and Sasahara, Asuka is thrust into a desperate battle to avoid becoming the next victim of the complex.

Although this sounds like a great idea for a story, it is, in reality, actually quite tedious. It isn’t particularly well written and there is little if any tension created. The setting should be creepy yet somehow manages not to be and the twist, when it does arrive, just makes you feel a little bit put that you just wasted nearly two hours of your life.

The film’s one saving grace is Atsuko Maeda, who puts in a brilliant performance in spite of having very little to work with.

If you have enjoyed Hideo Nakata’s previous work the you will probably want to avoid this one and keep remembering him for the good stuff.