4 stars for an excellent adaptation of a much reported case. 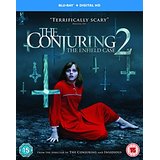 The Conjuring 2 is written by Chad and Carey Hayes (House of Wax, The Reaping) and directed by James Wan (Saw, Insidious: Chapter 2). It is inspired by events involving the Hodgson family and the Enfield Poltergeist (a story also covered in the mini series, The Enfield Haunting), which became known as the UK’s Amityville.

“It said it would kill you if I didn’t make them leave.”

Peggy Hodgson (Frances O’Connor – Mr Selfridge, The Missing) is a single mother struggling to raise her family of four children on a shoestring in North London. Her youngest daughter Janet (Madison Wolfe – Keanu, The Campaign) has just got in trouble at school for smoking and her youngest son Billy (Benjamin Haigh – Genius) has a stutter. 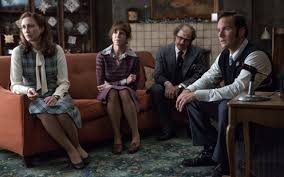 Happily her other two children, Margaret (Lauren Esposito – Love Child) and Johnny (Patrick McAuley) are on hand to help out. Things take a turn for the worst however when strange things begin to happen at the house. Janet starts to sleepwalk and wakes up in various different rooms and they all hear loud banging noises.

When things begin to escalate, furniture being thrown, Janet talking in strange voices and getting bitten, the police are called and also witness the events. As the newspapers get wind of the story, the church are alerted to the situation and wanting hard evidence before intervening, they call in outside assistance. 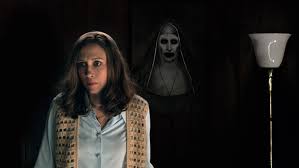 Although The Conjuring 2 is based on a real case, a lot of scepticism still surrounds the claims to this day, with plenty of people believing the family and just as many feeling the whole thing was an elaborate hoax, and this is well reflected in the film. 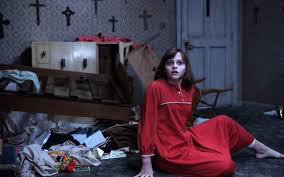 There is even an interview with Janet and Margaret Hodgson, as they return to the house for the first time in many years.

Wherever you stand on the original story though, this is an excellent film, with plenty of jump scares and some exceedingly sinister scenes, you certainly wouldn’t want to watch it in the dark. This is a genuinely good horror film, just in time for Halloween and perfect for a night of frightening yourself. Thoroughly recommended.

“Is there any chance of reconciliation?”

“He had twins with woman round the corner.”