3 stars for this disturbing but slightly confused thriller. 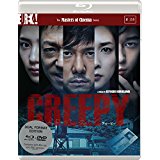 Creepy is a Japanese film, presented with English subtitles and is to be released on Dual Format DVD and Blu-ray as part of the Masters of Cinema series #159. It is based on the novel by Yutaka Maekawa and directed by Kiyoshi Kurosawa (Journey to the Shore, The Cure).

“That man is not my father. He’s a total stranger.”

Creepy tells us the story of Koichi Takakura (Hidetoshi Nishijima –  The Wind Rises, Tony Takitani) former Detective who specialised in criminal psychology. After an incident with a suspect leaves him injured and several others dead, he decides he isn’t cut out to be a detective and quits the force.

He gets himself a job as a professor at a university and he and his wife Yasuko (Yuko Takeuchi – Ring, Flashforward) move to a new neighbourhood. Despite having purchased gifts for their neighbours, they struggle to make friends as one is totally uninterested in getting to know them and Mr. Nishino (Teruyuki Kagawa –  Tokyo Sonata, One Piece Film Z) is very strange and has no social skills at all.

It’s not long before a fellow lecturer who has an interest in local crimes requests his help to investigate an old case which was never solved, involving a family who vanished without a trace leaving behind their teenage daughter. Word soon reaches his subordinate from the force Nogami (Masahiro Higashide – Parasyte: Part 1, Gonin Saga), who offers him the opportunity to investigate. After a shocking statement from the daughter of Mr. Nishino, he interviews Saki Honda (Haruna Kawaguchi – Bitter Sweet) who was left behind after her family disappeared and begins to draw closer to the truth and a terrifying revelation about his own situation.

Creepy does live up to it’s name for the most part, especially the first half of the film where absolutely everything is left to your imagination. However, towards the end of the film there are plenty of issues. The villain of the piece has powers over his victims which are never explained and frankly make no sense.

There are also a number of occasions where characters make decisions that seem at best careless and at worst stupid. They contradict themselves rather a lot too.

It’s not a bad film and it certainly has plenty of good elements, it is quite scary and pretty brutal in places and boasts one far too effective jump scare that nearly made me fall off my chair. All in all not a bad film and if you’re into this genre then you’ll want to see this one.

“You should forget about being a good neighbour. It’s not worth the hassle.”

Creepy is available to buy now on Dual Format DVD and Blu-ray.