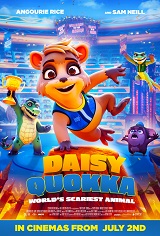 Daisy Quokka: World’s Scariest Animal is an Australian animated film written by Ryan Greaves The Wishmas Tree) and Trudy Hellier (Little Acorns). It is directed by Ricard Cusso (Combat Wombat) and is a delightful family film with no annoying catchy songs to get stuck in your head.

“I’ll admit it, we are pretty dang cute. So cute in fact that all Quokkas now work in tourism, taking selfies.”

Daisy (Angourie Rice – Spiderman: Homecoming, These Final Hours) is a young Quokka living on the beautiful island of Quokka Rocks, just ten kilometres off the coast of sanctuary city. 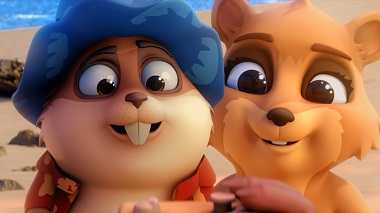 She lives with her Mum (Lucy Durack – Love in Lockdown) and Dad (Grant Denyer – Family Feud) who who the Quokka Rocks Tourism Bureau.

Living right on the beach it seems she has everything, but what she really wants from life is to enter the Ninja Warrior style World’s Scariest Animal competition like her hero Frankie Scales (Sam Neill – Jurassic Park, Event Horizon). Her parents are  dead set against this and have purchased her a ticket to Sanctuary City in order to run the selfie stand and become the face of the business.

It just so happens however that the World’s Scariest Animal competition has come to Sanctuary City and while she is there, she decides to try out. 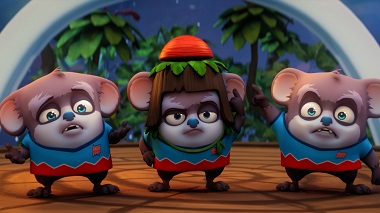 A chance meeting with Frankie leads to her finding a coach and joining the locals competing to represent Sanctuary City in the games.. She faces stiff competition in the form of Ronda Saltie (Sharnee Tones), trained by Jerry Whiskers (Andrew Cook), old rival to Frankie. Will she be able to qualify to enter the games and prove everyone wrong?

“Never give up on your dreams.” 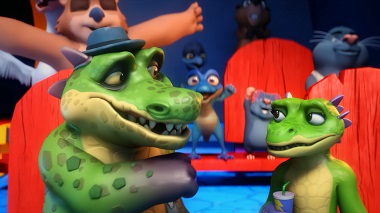 Daisy Quokka is a lovely film for the whole family to enjoy together. It’s a fairly simple story, a young aspiring athlete is taken under the wing of a washed up coach and they learn from each other, but it’s certainly very wholesome and an enjoyable tale. 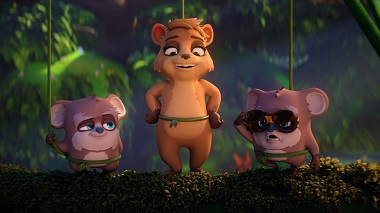 The animation is really very good, pleasantly colourful and the voice acting is excellent, moving the story forward nicely. It is a shame that Daisy looks nothing like an actual Quokka as they are very cute, but that’s not really important.

There are plenty of good messages for your little ones to take away from this film, about following your dreams, perseverance and self belief and all in all this will be a great return to the cinema for the whole family.

“Look at these tiny weak arms and these problematic sausage shaped fingers. I mean, who designed us?” 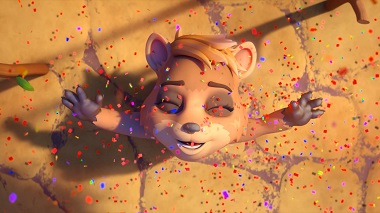