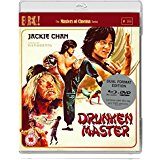 Eureka’s #166 of their Masters of Cinema releases and it brings us a classic martial arts film, with the legend that is Jackie Chan (Police Story, Police Story: Lockdown, Rush Hour) and Woo-Ping Yuen‘s second film (now one of thirty). He delivers an excellent show of skill in a comedy way. We are using the names from the subtitles of the dubbed version, there are also Mandarin and Cantonese versions available.

At the start of the film we see a man who has been hired to kill someone. His name is Thunderleg (Jang Lee Hwang, Snake in the Eagle’s Shadow) and his Kung Fu has never been beaten.

Freddie Wong (Jackie Chan) is a young brash arrogant Kung Fu trainee in his father, Robert Wong’s (Kau Lam, The Bells of Death) Kung Fu school. He takes the mickey out of the trainer when his father steps out of the room, this is where we first see the skills of the young Chan and his comic timing which he has honed over the last forty years.

At lunch time the trainees are outside eating when one of them spots a pretty girl and wishes he could cuddle her and Freddie takes this as a challenge and he proceeds to get his cuddle and a kiss.

With trickery and a well placed eel the young woman is soon in his arms, his friends are impressed and he wins his bet. That is until the girls chaperone spies his trickery and gives him a demonstration in her Kung Fu, soundly beating Freddie. Later he shows his kinder side as he comes across a poor man and his son who has been picked on by a bully who broke the man’s jade heirloom and refuses to pay him.

Freddie shows him the error of his ways and gives him a sound beating and recovers the money for the beggar and his son but Freddie is in for a serious shock when he returns home after doing his good deed and finds the young woman and her chaperone are actually his aunt (Linda Lin, Dance of the Drunken Mantis) and cousin (Jing Tang, Magnificent Butcher) who he has

never seen before. Also the father of the bully arrives with his son in traction and Mr Lee is a powerful man in the town. This is the last straw for Freddie’s father, who says he will disown him, but his aunt stops him and tells him to discipline him with Kung Fu. He agrees “Five hours of horse stance”. Even now Freddie doesn’t take this seriously and gets one of his classmates to make a crude chair for him, this is the final straw for his father

when he discovers it, he is bringing in the fabled master So Hai (Siu Tin Yuen, Mantis Fist Fighter) who is rumoured to destroy his students. So Freddie does the only thing he can, run away.

But fate has a way of finding you and when it does it is normally after a huge meal that you have stolen and been found out. Freddie and this old man take the fight to the restaurant owner and his huge goon Gorilla (Chun Hua Li,

Crazy Kung Fu Master). To Freddie’s horror the old man turns out to be So Hai, and the training starts and gruelling monotonous work it is, moving water from A to B. Freddie even cheats when he thinks the master is asleep. But he never gets the reason for the training and when he manages to get one over on So Hai he runs away to dry off his clothes but he chooses the

wrong location to do it, Thunderleg’s safe drop abandoned building. The brash Freddie takes him on and is soundly trashed and what is worse he is humiliated as Thunderleg says he is too small to ruin his assassins reputation for. He is sent packing in just his underpants back to Master So Hai.

This is an absolute must by for any martial arts fan as it is a classic and now as it has been given the Eureka treatment you can watch it in the format of your choice with all these special features.

·         PLUS: A booklet featuring a new essay by Michael Brooke and archival imagery