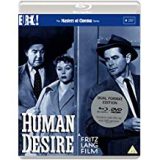 What Will You Do For Passion?

Based on the novel “La Bête Humaine” – by Emile Zola, The Sin of Father Mouret) this is the third incarnation of the novel and directed by the legendary Fritz Lang (Metropolis, Der Mude Tod, Spione, M, Moonfleet, Journey to the Lost City). Human Desire is a tale of what will you do and what will you get other people to do for you to achieve happiness all the while innocent love blossoms. Human Desire takes a stark look at this situation with no real connection to any of the characters, as if you are just getting snippets of the story by hear say, rather than what we see on the screen. 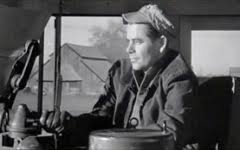 Jeff Warren (Glenn Ford, 3:10 to Yuma, The Desperadoes, The Man from Colorado) has spent the last three years fighting in

the Korean War, but now he is back and doing the job he loves, driving trains along with his old friend Alec Simmons (Edgar Buchanan, Shane, Tombstone: The Town Too Tough to Die) who is returning to bunk at Alec’s family home near the tracks. Along with his wife Ellen (Kathleen Case, Running Wild) and blossoming daughter Vera (Diane DeLaire, Cell 2455, Death Row).

Vera obviously had a crush on Jeff before he left and now that she is a young woman she knows what those desires mean and still directs them towards Jeff, who keeps a respectful distance from his friend and colleague’s daughter.

On his first day back he is replacing a sick colleague. As they cross the yard they bump into Carl Buckley (Broderick Crawford, Born Yesterday, Badlands of Dakota) who is now the assistant Yard-master, a position of authority but he is the first to get it in the neck from the Yard-master. It is a job he loves and it supports him and his young wife Vicki (Gloria Grahame, It’s a Wonderful Life, The Bad and the Beautiful, The Big Heat, In a Lonely Place).

Carl is a brash hot headed man and when the Yard-master has a go at him he lashes back and he gets the sack and turns to his wife to get his job back by talking to one of the rail-road’s biggest customers. He does this because Vicki’s mother used to be John Owens  (

Grandon Rhodes, Earth vs. the Flying Saucers, The Notorious Mr. Monks) house keeper when Viki was a teenager. The way she acts when he requests her to contact him, tells us she is reticent to do so but eventually she agrees and they make their way to Chicago to see him, coincidently Jeff is driving the train to Carl and Vicki’s destination.

Vicki keeps her word and goes to see Owens while Carl stays at her friends Jean’s (Peggy Maley, The Wild One, Live Fast, Die Young) house .

Have to! It’s much better to have good looks than brains because most of the men I know can see much better than they can think.”

The thing that irks Carl is that she has taken five hours to get his job back for him, but Carl is a very jealous man and aggressively questions Vicki until he beats the truth out of her. That she had an affair with him before and he wanted revisit his former housekeepers daughter’s charms.

Carl forces Vicki to write a note to Owens telling him that she wants to meet him on the train back while Carl stays behind in his cabin. But Carl has different plans and Jeff who is getting a free ride home is about to become involved, very involved.

Human Desires is a classic look at emotions when the USA was involved in another war and the price of life was cheap, but too high a cost for some. One for your Black and White collection.

Human Desire is available on Dual-Format.