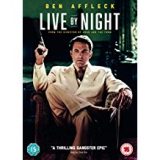 Taken from the book by Dennis Lehane (The Mystic River, Gone Baby Gone), Ben Affleck writes the screenplay and directs and stars in this prohibition gangster film. An in depth story of a man’s journey from the horrors of war to the balmy rum soaked shores of Tampa Florida. However, a lasagne with three layers is great, but adding a forth layer doesn’t make it better. A good matinee film.

Joe Coughlin (Ben Affleck, Argo, Good Will Hunting) was a patriotic man and signed up in 1917 to fight on the battlefields of France. He was struck by the horrors that one man can do to another,

sent by those that sit in offices. He vowed that if he survived he would never follow an order again.

Now he is back State side, Boston in the middle of the Prohibition era. He becomes a small time crook, robbing shops and banks. The cities underworld is split between Albert White (Robert Glenister, Cryptic) an Irishman and Maso Pescatore (Remo Girone, Heaven) the Italian connection and they are both vying to supply rum to the speakeasy’s of the city.

Joe hears of a high stakes poker game going on and he has a ‘man’ on the inside who will leave the back door open. Joe and Dion (Chris Messina, Devil) and another burst in and take the pot and are asked if they know who they are messing with. Albert White that’s who and the ‘man’ on the inside is Emma Gould (Sienna Miller, Stardust) his lover and also and evermore dangerously the girlfriend of Albert White.

While White is out of town dealing with his other operations, the pair steal precious time together and it is whilst they are having dinner that his father, Tom Coughlin shows up. He doesn’t take a liking to Emma as she would knowingly go out with an outlaw, yes his father knows what his son does to make money, well he should, he has been a copper for 37 years.

He refuses and Joe and Emma plan on leaving for California, but Joe has one

more job to do and it will fund their travel. A bank job that goes to plan until the getaway, when Joe is driving a defective vehicle and the police give chase until they get to their spare car and they split up. It all goes wrong and there are police bodies everywhere by the time it is over. Joe survives and makes it back to Boston to meet with Emma and get out of town. He makes it to the swanky hotel and spies Emma and they head for the kitchens and the service elevator. Joe thinks they are on the way to paradise but when the elevator opens Albert White is waiting for him, Joe has been betrayed by the woman he loves.

Lucky for him he is saved the drive of the dead as his father and a load of policemen turn up looking for the cop killers.

Now he has to get revenge.

“It’s not enough to break the rules, you have to be strong enough to make your own.”

A great cast and acting, supporting is Elle Fanning (Maleficent), Zoe Saldana (Avatar, Guardians of the Galaxy) and Chris Cooper (The Bourne Identity).