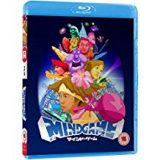 From director Masaaki Yuasa (Space Dandy, Lu Over the Wall) and All The Anime comes a wierd and wonderful story of a man with a second chance at life.

really doing anything with his life. Until one day a young woman jumps onto the tube train and gets her foot caught in the closing door, which allows a man to enter the carriage. Nishi is sat in the carriage and immediately recognises the girl Myon, his childhood sweetheart. Unbeknownst to everybody the man that entered the carriage after Myon was  yakuza following Myon.

They leave the tube together and Nishi walks Myon towards home, but not before fixing her swollen ankle and confessing his undying love for her, but she is engaged to Ryo. A stumbling block for this love struck puppy,

(This is where we see the stranger side of this anime as the anime faces become animated real faces to show the emotions), through flashbacks we see them swapping love notes in school corridors through the years.

It turns out that Myon and her elder sister Yan run a restaurant in town, they enter and sit as her father recants his philandering years and his new girlfriend Riko (the same age as Yan). These tales upset Nishi and he has a go at dad about how he can say these things in front of the two women he loves most in this world.

Then Ryo comes in and joins the group for some food and beer, Ryo is a swarthy young lorry driver and Nishi feels intimidated by this good looking man.

“Nice smile too, I’m history. She is yours.”

A car pulls up outside and two men enter the restaurant, Atsu and a senior

yakuza whom Atsu calls Aniki (lit. brother. A term used by Yakuza to refer to each other). Atsu is a massive bald man who grunts like a gorilla and squeezes his football until it bursts, which sets him off on the reason they are here.

Dad owes the yakuza a big debt and that is why he is cowering round the corner of the bar out of sight. Yan says that he is out of town and that she just works

part time so doesn’t know of his plans. But Atso is a bit more gung-ho and gun whips Ryo, knocking him out and he fancies a piece of Myon and is intent on raping her, he wanted to do it in front of Ryo, but too late for that so he gives Nishi the option of joining in. But with a 9mm stuffed in his butt crack it is hard for him to concentrate.

Nishi’s rage builds to bursting point as he is intent on giving Atsu some pain.

BANG! too late Atso fires and you get a very graphic scene of Nishi’s death as the bullet enters  at one end and exits at the the other end.

physical image changes every fraction of a second, Kami-sama (God). He tells Nishi that his life is over and he should enter the red void and fade away and do it quickly as he is off out on a hot date through the blue void. Half way through the red void Nishi says sod this and rushes for the blue void hotly chased by God. He beats God to the door and God says good luck kid.

He appears back in his body a few seconds before his demise, this time when he’s given the offer he tightens his butt cheeks on the gun and pulls it from Atso’s hand and flicks it around and grabs it and puts a bullet in Atso’s head. Nishi, Myon and Yan make a dash for it with the yakuzas car keys get away.

“Atso was the Maradona of Osaka!”

What ensues is a mad football based car chase and much multi-coloured antics all from the strange mind of Masaaki Yuasa. A very strange experience, but weirdly compelling.

Mind Game is available on Blu-ray.