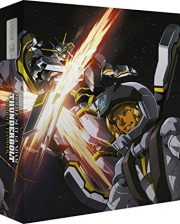 The Fight For Earth Continues.

Director/ writer Kō Matsuo (Natsuyuki Rendezvous) gets it right, with this slice of the one year war In U.C. 0079. The Gundam collections grow and this is the slickest yet. With great character creation and sweet animation that shows off the manoeuvrability of the modern mecha suits and the vulnerability of those inside the suits and ships. Bandit Flower follows on directly after Gundam Thunderbolt: December Sky.

With both sides licking their wounds, there still isn’t any let up in the fighting. As Earth Federation launch an assault on the Zeon’s A Baoa Qu fortress, Io and his comrades escape captivity while several Zeon forces retreat, taking Io’s Gundam with them. Eight months after the end of the One Year War, the Federation continues to battle Zeon remnants on

Earth. The Federation carrier Spartan enters Earth orbit, but a Musai-class ship launches its Komusai shuttle for a kamikaze run on it. Suddenly, a new Gundam piloted by Io is launched from below and it slices the Komusai in half to save the Spartan.

The Zeon, even though defeated still fight on in factions all over the planet. Even Sydney Australia has been flattened and the fighting still goes on as enemies spot each other.

The South Seas Alliance, a Buddhist radical cult faction of the Federation, plots to declare itself independent. Furthermore, it is discovered that they possess the Reuse P. Device technology of Daryl’s Psycho Zaku. The Spart

an is assigned to track and destroy the Psycho Zaku before the South Seas Alliance can mass-produce the technology. In Antarctica, Bianca’s squadron is ambushed by Zeon mobile suits. Io sorties in the Atlas Gundam and dispatches the enemy units before facing a Grublo mobile armor. The battle sends both units far too deep underwater and Io with his equipment lost slowly sinks to the bottom of the sea, but Bianca in her damaged

Guncannon Aqua lifts him back to the surface.

The South Seas Alliance has grown quickly under the leadership of Levan Fuu, how has his words spread so quickly? 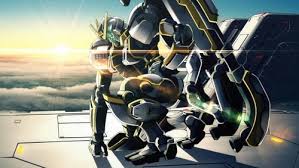