This is a highly entertaining BBC series and I have given it 4.5 stars. 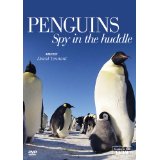 Penguins Spy In The Huddle documents the amazing and crazy lives of three different types of penguin as they struggle to survive in their entirely different yet equally extreme habitats.

This pioneering new series is from acclaimed wildlife producer John Downer (In-Flight Movie, Supersense, Lifesense) and features 50 spy-cams  scattered throughout the various colonies, disguised as penguins, rocks and eggs, enabling infiltration into the heart of the colonies on a level never before possible.

The interaction between the penguins and these cameras is very endearing, they certainly embrace them  and as such allow intimate insight into all aspects of their lives.

The mind boggles at how ill-equipped penguins appear to be for actually being penguins, however as this footage shows, they all seem to muddle through somehow.

Penguins Spy In The Huddle is narrated by the magnificent David Tennant (Dr. Who, Broadchurch) who does an excellent job and takes what was already entertaining footage to a new level.

Add to all this the fact that penguins are, of course, ridiculously cute and very entertaining to watch and you’re onto a winner. There was a lot of laughter and even a few tears watching this, thoroughly recommended and one for the whole family!