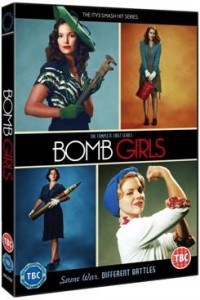 groups in 1941, but they do have one thing in common; doing their bit for the war effort.

Victory Munitions sets the scene as the new girls line up to sign in. Lorna Corbett, (Meg Tilly, Body Snatchers) runs the factory floor as the matron and she lays down the rules that sparks kill.

The best worker is Betty McRae, (Ali Liebert, Apollo 18) and she is charged with training the girls of Blue shift, on the assembly of 25llB’ers. 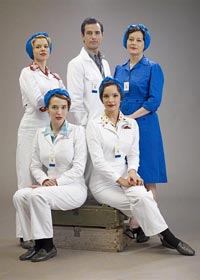 Watching the ladies is Marco Moretti,(Antonio Cupo, American Mary) an young man with Italian heritage much to the dismay of Lorna who does not trust his motives for working in the Munitions factory and plots to get him sacked.

Kate/Marion is a timid innocent girl who has escaped the clutches of her abusive father who preaches on street corners with his family singing the lords praises. With the aid of her Mother she manages to escape into the night and find board at a house under her new name.

Whereas Gladys comes from good stock and is well to-do, with a new fiancée working with her father on military food contracts.

When she says that she wants to do her bit for the war effort, this is met with scorn and sexism, (which plays a large part of the series as well as racism and plenty of smoking and sexual content) but they come to a compromise and let her work in the office filling papers.

Bur Gladys yearns for more, the factory floor building bombs for the allied boys. But she comes across the same scorn and class-ism. She forges forward with her ideals and new ideas for taking the factory forward much to the dismay of Richard Fitzpatrick,(Harold Akins, 16 Blocks). 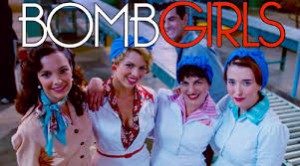 There are many underlying stories in the series, this only adds to the appeal of these episodes as well as a cracking soundtrack with music from the likes of Irving Berlin, Jill Barber, Billie Holiday and Adaline.

With Series Two coming to ITV soon this is the perfect way to start your collection, I wish there was a soundtrack album.

Available to Buy On DVD now.