3 stars for this American remake of a classic British series. 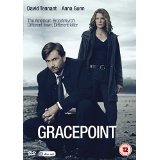 Gracepoint is heavily based on Broadchurch, written and adapted by Chris Chibnall (Camelot, United) for ITV and moved to a small town in Northern California.

The story starts with the discovery of the body of a young boy on the beach in Gracepoint. Investigating the case is Detective Emmet Carver (David Tennant – Broadchurch, Doctor Who), brought in from Rosemont to get away from a failed case and it’s repercussions, only to find himself thrust straight into a very similar situation. 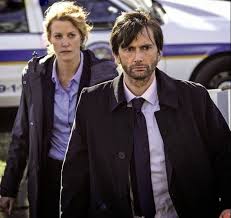 Forced to work alongside him is Detective Ellie Miller (Anna Gunn – Breaking Bad, Deadwood), who lost out on her promotion due to his arrival. They must somehow overcome their differences in order to solve this tricky case. 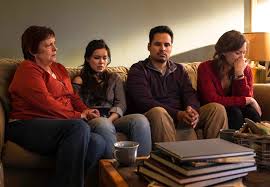 Together with their daughter Chloe (Madalyn Horcher  – Riding 79), the family must begin to come to terms not only with the death of their son, but also the very real possibility that the culprit is someone they know.

As is always the case in these investigations, almost everyone has something to hide and everyone is suspicious. Things get even worse when the press begin to wade into the fray, first the local rag, 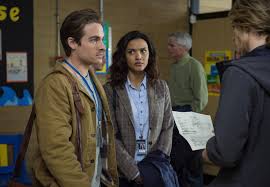 Gracepoint Journal, in the form of Owen (Kevin Zegers – Wrong Turn, The Colony) and then the San Francisco Globe, with their reporter, Renee Clemons (Jessica Lucas – Evil Dead, Cloverfield) willing to do anything it takes to get a story.

If you have seen Broadchurch then all this will sound very familiar. In fact it is almost word for word and scene for scene the same as the original. The names, location and most of the actors have changed but everything  else remains the same. There are a number of standout performances, most notably Nick Nolte as the town scapegoat, Jack Reinhold, but for the most part the acting isn’t quite as good as the original and doesn’t feel as sincere. 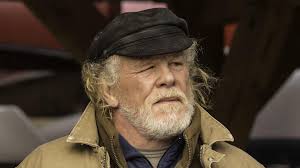 There have been some additions, with different elements being woven into the original story, but how necessary they are is debatable. It does translate quite well into an American setting, accommodating nicely the differences in American police procedure, legal system and of course gun laws.

There is also the promise of a different ending to keep those who have seen Broadchurch watching to the end, however it doesn’t really work and throws into doubt other elements of the story that would have been fine if left alone.

If you have seen Broadchurch then it really isn’t worth watching this. If you haven’t and have no access to it then I expect that Gracepoint will have the desired impact and the changes certainly feel tailored to an American audience.

“If you have an accusation, or any real evidence, let’s hear it. Otherwise, I’ve got work to do.”

Gracepoint is available to buy on DVD from 08th June 2015