This is an amazing film, 5 stars of glorious British feel-good factor. 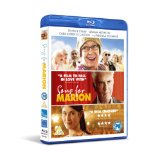 Song For Marion is written and directed by Paul Andrew Williams (The Cottage, Cherry Tree Lane) and it is an emotional roller-coaster from start to finish.

It tells the story of Arthur (Terence Stamp – The Adjustment Bureau, Yes Man), who is a proper grumpy old man, grumpier even than Victor Meldrew. Shy and nervous of meeting new people , his only inspiration in life is his bubbly, fun loving wife, Marion (Vanessa Redgrave – Howards End, Mission: Impossible). She is a keen member of the OAPZ, a choir with a rather unorthodox song sheet, including “Ace of Spades” and “Lets Talk About Sex“, and longs for him to join and sing along with her. 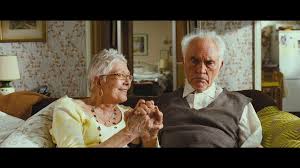 Following a tragic turn of events, Arthur finds himself unable to connect with anybody or anything, increasingly estranged from his son James (Christopher Eccleston – Shallow Grave, Dr. Who) and grasping to find some kind of human contact.

Enter Elizabeth (Gemma Arterton – Quantum of Solace, Hansel & Gretel: Witch Hunters), the charismatic choirmaster of the OAPZ, hell bent on taking her choir to an international competition and equally keen to take Arthur along for the ride and help him to find himself through song. 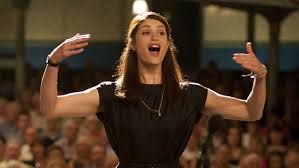 Song For Marion is beautifully written and has you alternating between tears and belly laughs all the way through. The OAPZ are both inspirational and hilarious and all the performances are incredibly heart-felt and honest. Although it is almost unbearably sad in places, it still manages to put a smile on your face in the very next scene, a real achievement and something at which the British excel.

Song For Marion really does make you want to join in and I would recommend it thoroughly, just a lovely film to watch. A definite must have for any collection.