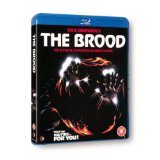 The Brood is written and directed by David Cronenberg (eXistenZ, Naked Lunch), but he seems to have abandoned his penchant for the surreal and moved into the downright daft with this one.

The concept in itself is actually quite scary, Dr Raglan (Oliver Reed – Gladiator, Women in Love) is experimenting with a new therapy technique, called psychoplasmics, which enables his patients to release their rage through physiological changes. As a result of the therapy, one of his patients, Nola Carveth (Samantha Eggar – Hercules, Dr. Doolittle) develops the ability to project her rage into physical form.

Now I was expecting to see all manner of horrifying creatures being produced. What I wasn’t expecting was the appearance of dumpy, slightly angry looking chavs in tiny ski suits. The acting is very good, great performances are put in by all, but even good actors can only cover up a limited amount of silliness. 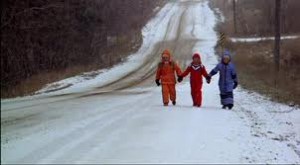 The Brood also stars Art Hindle (Invasion of the Body Snatchers, Paradise Falls) and Cindy Hinds (The Deadzone, Deadline), again both brilliant but not much to work with.

Upon its initial release in 1979 The Brood caused quite a stir, thought of as being too gory and too graphic, which just goes to show what a different world we are living in now. The final scene is supposedly one of the most notorious scenes in horror film history. Presumably that is all down to the braniac who sat there at the meeting when they asked “These monsters are a bit rubbish, what can we do to make them scarier?“, raised his hand and said “Put them in pastel pink and blue baby grows!” That’s it! Pure genius. This man should join NASA.

All that being said, this is essentially about the conversion and that is very good, the picture is crystal clear and you can see everything in probably way more detail than you would want to. The sound quality is also excellent and there are plenty of special features to make the die hard fan happy.

All in all, not the classic it claims to be, but if you like horror and you fancy a good laugh, maybe worth a look.