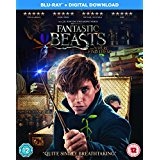 Fantastic Beasts and Where to Find Them is produced and written by J.K. Rowling (the Harry Potter series) based on her novel of the same name and is her screenwriting debut. It is directed by David Yates (State of Play, Harry Potter and the Order of the Phoenix).

“My philosophy is, if you worry you suffer twice.” 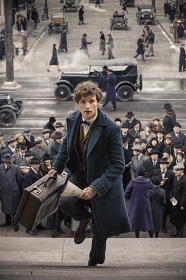 Set decades before Harry Potter reads his book in the library, Fantastic Beasts and Where to Find Them tells us the story of Newt Scamander (Eddie Redmayne – The Theory of Everything, The Danish Girl), a Magizoologist and former Hogwart’s student, who has been travelling the world finding and documenting magical creatures in an attempt to educate other wizards.

He carries with him a fabulous expanding suitcase, which contains his collection of magical creatures. Unfortunately, tensions are running high when he arrives in New York. Something is terrorising the streets and anti-magic sentiment is rife among the No-Majs (Muggles) led by Mary-Lou Barebones (Samantha Morton – Minority Report, In America). 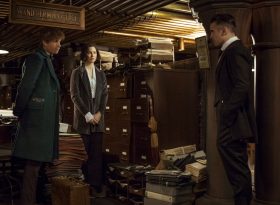 When he accidentally switches suitcases with aspiring baker Kowalski (Dan Fogler – Custody, Barely Legal) and a niffler escapes, he is spotted by demoted Auror Tina (Katherine Waterston – Queen of Earth, Manhattan Romance), who takes him to the Magical Congress of the United States of America (MACUSA) as an unregistered wizard, to try and get her job back.

Unfortunately for her, the suitcase contains only baked goods and he is released. However, when he regains his suitcase and several creatures escape they must recover them before too much damage is done, all the while avoiding the attentions of Magical Security Director Percival Graves (Colin Farrell – Horrible Bosses, In Bruges) and attempting to identify the evil which plagues the city.

Fantastic Beasts and Where to Find Them is a really enjoyable film to watch. Eddie Redmayne is excellent as the socially inept wizard, far more at home with his beasts than with people and he holds everything together brilliantly. The script is good with plenty of comedy and it offers some interesting insights into the world that paved the way for Harry Potter.

The special effects are very good and the creatures are quite enchanting, especially the Niffler, which manages to be adorable and irritating all at once and the Bowtruckle, which resembles a tiny tree. This is a most welcome addition to the Harry Potter franchise and I look forward to the sequel. A must have for Harry Potter fans and Muggles alike.

There are various versions available to buy, including 3D Blu-ray, Steelbooks and a limited edition box set, featuring a Niffler statue.

“We’re going to recapture my creatures before they get hurt. They’re currently in alien terrain surrounded by millions of the most vicious creatures on the planet; humans.”

Fantastic Beasts and Where To Find Them is available to buy now on DVD, Blu-ray, 3D Blu-ray and limited Edition 3D Blu-ray box set.