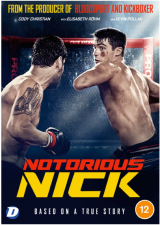 After the Superhumans at the Paralympics, this is the icing on the cake. Based on the true events in the life of Nicholas Newell (XFC Lightweight Championship). Aaron Leong (Mamaboy) brings us his second feature after a five-year gap, and he has comeback with a knock-out punch. From ridicule to adulation.

The film starts as Notorious Nick is in the MMA cage about to fight, the guy he is fighting has form and when the fight starts it does not go well for Nick when we flick to fifteen-years earlier.

Young Nick (William Jackson Kelly) is the centre of attention for all the wrong reasons, as a bully tries to take his prosthetic left arm off. He succeeds, but only for a second, as another boy comes up and spoils the bully’s day. Abi (Marcellus Maxwell) loves wrestling, as does Nick, and they form a

bond that will last forever. Nick’s mom Stacey (Elisabeth Röhm, American Hustle, Angel (TV Series)) looks after him on her own, as his father Erroll (Erik Jorn Sundquist, The Last Smile, War Path) couldn’t handle having a disabled son.

This is the start of a new passion for Nick and Abi, but it all starts with prejudice and name-calling, which gets worse when he gets beaten by a girl. He persists with the encouragement of Abi and the coach. Until at the regionals he thinks he has let the team down, he has a moment of crisis.

Look. The only disability is a shitty attitude Nick, you can do it.

Go Mom, she even uses her money for nursing college to fund for him to have tuition during the summer break. She also sees that one of Nicks hero’s Jim Abbott (Jonathan Cowley) a major baseball player is giving a motivational speech, she gets them tickets. Nick manages to have a one-on-one talk with Jim.

You have to work harder than everyone else.

This inspires Nick, but the road always has bumps within it, and this is Nick’s story so let his exploits inspire those that think the world is against them.

Fear is only temporary, regret is forever.

Notorious Nick is by far the most inspiring film I have seen in many a year and is well worth a watch to get your heart pumping during the training montage’s and feel the swell of your heart as you watch Nicks story.

You do know, I know nothing about MMA?