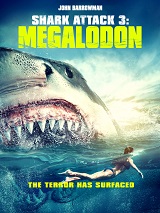 Shark Attack 3: Megalodon is the third film in the popular Shark Attack franchise and was originally released in 2002 (although it looks for all the world like something straight out of the eighties!) It is written by Scott Devine (Shark Attack 1 & 2) and William Hooke (Domino) and directed by David Worth (Kickboxer, Hazard Jack).

“The shark was probably just curious and took a bite at the cable to see what it was. Sharks are always biting things.”

The SS Bountress is carrying out repairs at the Pacific Challenger Deep Trench when a tragedy occurs. An unknown creature appears, much deeper than should be possible and takes out a deep sea diver. 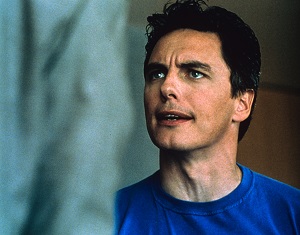 Cut to Colima, Mexico and the Playa del Rey resort. Beach security patrol officer Ben (John Barrowman – Torchwood, Zero Dark Thirty) and his partner Esai (George Stanchev – Alien Hunter) have strayed off course a little during their patrol in order to find some lobsters for supper.

Whilst diving, Ben makes an interesting discovery, a power cable appears to have been bitten and left behind is a huge sharks’s tooth. They are rumbled by Apex Communications, the owners of the cable who send them packing with a stern warning not to mess. 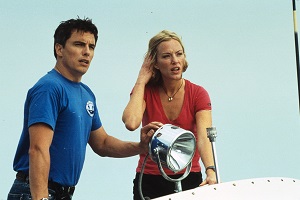 Unable to find a species match for the tooth, Ben posts a query on “The Internet” which is spotted by paleontologist Cat Stone (Jenny McShane – The Watcher, Grimm) who immediately recognizes it and heads for Playa del Rey to investigate for herself.

Upon arrival she lies to Ben, telling him she works for an aquarium, not wanting to reveal the truth that she believes it to be an extinct kind of giant shark called a Megalodon. This could be a major problem considering the amount of food available at a resort. With all the odds against them it’s a race against time to save the day. 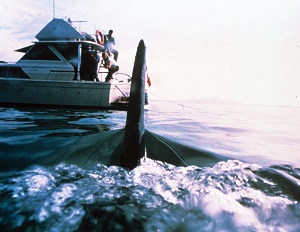 This is a thoroughly enjoyable film to watch. It doesn’t take itself too seriously and is packed with playful nudity and some surprisingly fruity language, especially from John Barrowman, which made us do a double take. It is pretty gory in places and there is plenty of munching of limbs and lots of peril.

The special effects are genuinely rubbish and look as if they cost about a tenner each at the most, and yet if anything that just makes it more fun. 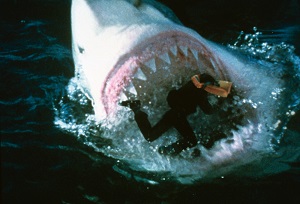 It’s also educational, I didn’t know sharks roared before watching this. I can say without a shadow of a doubt that you haven’t lived until you’ve seen John Barrowman hitting a shark with a baseball bat.

In the current crazy situation we find ourselves in, this sort of gleeful silliness is just what the world needs right now. Grab some popcorn and settle down for a treat.

“You cannot let people swim in the water when there’s a shark out there!” 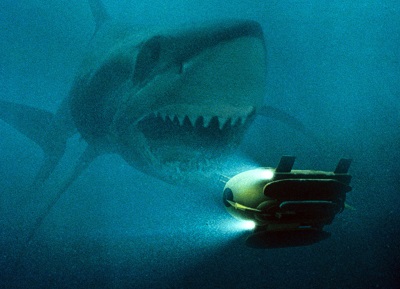