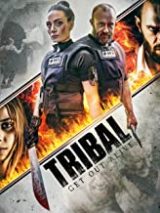 The time is here for first time writer Johnny Walker and first time feature director Matt Routledge to rise, as they bring their independent film, which is full of martial arts and horror to life, what more could you want? Well nothing’ if you are a horror/martial arts fan. Loads of latex and body parts, tight dark corridors, and a ton of weird noises. Perfect. Also, it is great to  see Zara Phythian (In 2006 she became the first British martial artist to be inducted into the International Karate & Kick-boxing Hall of Fame (IKKHoF)) as the super strong female lead.

A police surprise nighttime operation at Kenning Farm near Liverpool UK to remove homeless squatters, goes awry when one of the officers, a Sgt Lawson (Stephen Threlfall) is hacked to death by an unknown assailant.

Sometime much later ex-army buddies Caitlin (Zara Phythian, Cannibals and Carpet Fitters, Furor: Rage of the Innocent, Warrioress) and Brad (Ross O’Hennessy, Game of Thrones (TV Series), The Bastard Executioner (TV Mini-Series)) have settled for a less stressful life, as Caitlin suffers from PTSD and has flashbacks of the horrors of war, so now a life as bailiffs and security operatives seems a better way to spend their days. They have been sent to the docklands of Liverpool to kick out some teenage potheads, but what they find is a drug Lord (Rob Ho, Landlord: Time to Pay the Rent) and a drug dealer (Justin Tinto) going about their nefarious business. The pair give them fair warning, but they have henchmen, and they send them after our bailiffs, and we get our first taste of the skills of our heroes.

Our victorious duo get a telling off from those in charge, but it was self-defence

guv, honest. She tells them their next assignment should be a doddle. Clear out Kenning Farm for the new owner Richard Kenning (Thomas Dodd), who has inherited it from his estranged 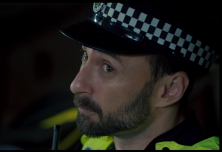 Dr father (Dougal Porteous). They expect protestors and a few layabouts as Dr Kenning always allowed transients to stay around the farm, much to the disgust of his son. Caitlin and Brad have a team, Rebecca (Rachel Warren, The Snare), the much despised Ollie (Grayson

James Matthews, Requiem for a Fighter), Michael (Shad Ellis, S Club Seeing Double) and Jen (Charlene Aldridge, Pie n Mash) to close off the farm and for legal reasons there will be a police presence in P.C. Williams (Mark Sears, The Recovery) and P.C. Gray (Kerry Newton, Dragon Kingdom) as well as the young Mr Kenning. Their objective is search the farm house and close off the property from any would be squatters.

But as soon as they enter the building strange noises are heard and people think they see things and Mr Kenning finds evidence of his fathers presence. As it get dark people are starting to tire and letting their guards down and they start getting scared as people disappear and bodies start falling. 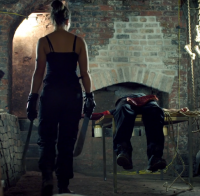 They find out that there may be two ways out of the farm, so they split up into skill-set groups as Caitlin and Brad go separate ways.

What they both find is evidence of Dr Kenning’s work, the Tribe, his experiments, and with the Dr’s death they are hungry and will eat whatever is available, and it isn’t vegetables.

They are faster, stronger and smarter. 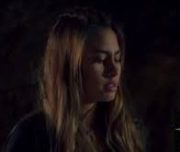 Kenning thinks about his own legacy. And when he discovers Maya (Valerie Thomas, Return of the Devil’s Child) his life will change forever.

Tribal Get Out Alive is an excellent British Independent horror film, with superb martial arts to keep the body parts flying. It holds the tension that only British filmmakers seem to be able to do. Can our heroes survive the Kenning legacy? Make sure you watch this film in the dark and with someone you trust. 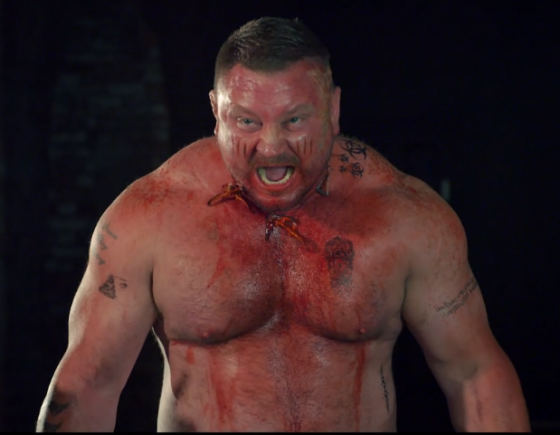