4 stars of charming family fun for half term. 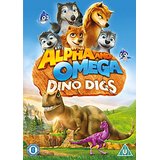 Alpha and Omega: Dino Digs is written by Tom Kane, directed by Tim Maltby (The Ultimate Spider-man) and based on the characters created by Steve Moore (In The Bleachers). It is the fifth installment in the Alpha and Omega franchise. 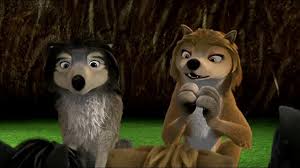 This film tells the ongoing story of Kate (Kate Higgins – The Last: Naruto The Movie), an Alpha wolf and her partner Humphrey (Ben Diskin – Digimon Fusion), an Omega wolf.

The nature reserve in which they live is gradually being developed by the owner, Mac (Edward Bosco – Dust: An Elysian Tail), much to the disgust of his brother Ian (Chris Niosi – Patema Inverted), who wishes to conserve the natural habitat of the animals. 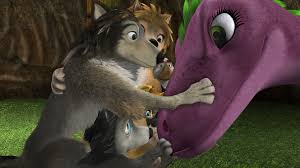 They have turned part of the reserve into a golf course, complete with a fake lake and built plastic and artificial caves for the wolves overlooking it, known as “Wolfburbia”. Concerned for the wellbeing of their pups and egged on by the golf crazy Paddy and Marcel (Chris Smith – Jormungand, Attack on Titan) Kate and Humphrey decide to move to Wolfburbia as it is a safer environment.

Pups being pups though, it isn’t long before Runt (Hunter Swan), Stinky (Kate Higgins) and Claudette (Lindsay Torrance) manage to find trouble. They encounter a dinosaur called Amy (Erin Fitzgerald – Monster High), who has been dug up by the owners of the reserve, hoping to sell the bones to a museum. However, it is a magical site and the dinosaurs are not dead. 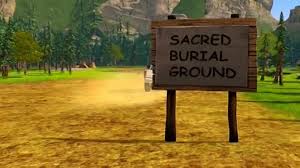 Now the race is on to stop them before they can unearth and reawaken the T-Rex which is also buried there.

Alpha and Omega: Dino Digs is a very entertaining film, long enough to tell a good story and short enough to hold the attention of your little ones to the end. The antics of the mischievous pups will delight children and the charming storyline is interesting enough to please the adults too.

The animation is very nice, colourful and eye catching and it has a good soundtrack too. You don’t need to have seen the previous films to appreciate this one, it works well as a stand alone.

Thoroughly recommended this half term, this film will get watched over and over again.

“Everything else in this park is fake, why does the dinosaur have to be real?!” 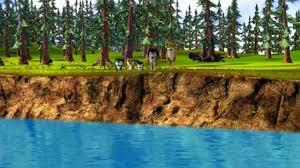 Alpha and Omega: Dino Digs is available to buy now on DVD