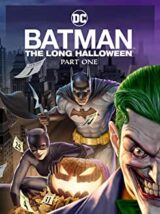 Taken from the writer of the original miniseries of the same name by Jeph Loeb (Wolverine vs. Sabretooth (TV Mini Series), Teen Wolf), he also wrote this version. Directed by Artist/director Chris Palmer (Voltron: Legendary Defender (TV Series), Superman: Man of Tomorrow (Video)) who brings us a tale of the Batman in his formative years, a Bat that doesn’t have all his skills honed at this time, he is good, but he is still a little rough around the edges as he goes after a serial killer who strikes on major holidays.

It’s a dark night in Gotham city, and Bruce Wayne (Jensen Ackles, My Bloody Valentine, The Buddy Games) is with Carmine “The

Roman” Falcone (Titus Welliver, Bosch (TV Series), Escape Plan II) on Halloween night. Bruce’s father built a hospital with him, but Falcone is on the wrong side of the law for Bruce’s liking. Meanwhile, across

town The Roman’s nephew is taking a well-earned bath, with his eyes closed he doesn’t see the intruder with a gun or the babies dummy being put on the end of the barrel. Never mind the two bullets that end his life. The killer leaves a calling-card of the murder weapon and a jack-o-lantern.

In the suburbs, new to his job as Commissioner, James Gordon (Billy Burke, Angels in Stardust, The Twilight Saga: Breaking Dawn – Part 1) is at home with his wife Barbara (Amy Landecker, A Kid Like Jake, The Hunter’s Prayer) and their two young children, who are eager for the chance of candies.

District Attorney Harvey Dent (Josh Duhamel, Transformers, Transformers: Revenge of the Fallen) hasn’t got the marital bliss he hoped for in his wife Gilda (Julie Nathanson, Final Fantasy XV (Video Game), Far Cry 5 (Video Game)) she always seems far away in her own mind, and she hates the fact that she cannot give him a baby.

Whatever their plans were they have just changed due to this high profile murder, the Bat-signal goes up and Gordon and Dent head for the roof of the police station. Here Gordon tells Dent to go in the light and Batman to do what he does in the shadows, talking of shadows

who is that watching? It’s Catwoman (Naya Rivera, Frankenhood, Mad Families), so Batman gives chase across the high-rise silhouette of Gotham, until they get to her destination, a Falcone warehouse that is full of billions of dollars of his dirty money. Instead of following Gordon’s orders, he has followed Batman with a hidden tracker. Now they have the dilemma of what to do with all that dirty money.

Who said anything about moving it.

Heads, we burn it down.

This doesn’t go down well with any Mafia boss, and it isn’t long before Dent’s home is rendered useless and nearly him as well. Batman goes after a lead to get who did this dastardly deed. Soon Batman is up to his ears in baddies that he put away in Arkham and the Holiday’s keep coming around and people keep dying, and they are all connected to…

Batman: The Long Halloween is shaping up to be a cracking origins story, with the madcap characters of the DC  world. Definitely looking forward to part two (expected around the 26th July)

Who is the Holiday Killer? 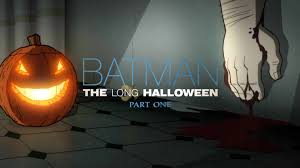 Justice Society: World War II – Consumer Trailer HD
Batman: Soul of the Dragon – Consumer Trailer HD
Batman: Death in the Family – Consumer Trailer HD
A Sneak Peek at the Next Animated DC Universe Movie, Batman: The Long Halloween Part Two – The saga continues as Batman desperately hunts the Holiday killer and Harvey Dent comes face to face with his worst nightmare.
DC Showcase: The Loser
From the DC Vault: Batman The Animated Series: “Christmas With The Joker” – After escaping Arkham Asylum on Christmas Eve, the Joker takes over Gotham’s airwaves and terrorizes the city for a crime. He challenges Batman and Robin to find his hidden TV studio and free his hostages – Commissioner Gordon, Detective Bullock and Summer Gleeson – before midnight.
From the DC Vault: Batman The Animated Series: “It’s Never Too Late” – A mob war between crime bosses Rupert Thorne and Arnold Stromwell is nearing its end when Batman saves Stromwell and tries to persuade him to give up his life of crime and help the police bring Thorne down by testifying against him.