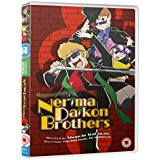 Nerima Daikon Brothers was first released in 2006 and is directed by Shinichi Watanabe (Excel Saga), who also appears in the Japanese version of the show as the mysterious shop owner.

“Grope me now and give me my big break!”

Along with their cousin Mako (Luci Christian – One Piece, Samurai Bride), who hails from Okeyama and has very expensive tastes, they make up the band Nerima Daikon Brothers.

The three of them live on a stage which is set up in the middle of the daikon field and their greatest ambition is to one day build a Rock and Roll Dome in the field, where they can bring their music to the masses.

Hideki is in love with Mako and wishes to marry her one day, even though they are cousins, but his feelings are not reciprocated. Mako only has eyes for Ichiro, who isn’t interested and she often butts heads with the local policewoman Yukika (Carli Mosier – Fate/Kaleid Liner Prisma Illya) over his affections. They get a fourth member of the band in the form of Pandaikon (Kira Vincent-Davis – Chaika – The Coffin Princess), an adorable little panda who they catch eating their daikon. Although Hideki and Mako want to eat him, he is saved by Ichiro and often turns up to help the trio when they need it most. 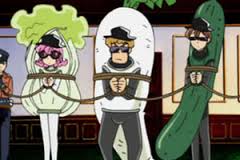 In order to fulfill their dream, they need money and this is where they begin to get into scrapes. Each episode features a different escapade, usually involving the band acquiring large amounts of money and then losing it again, to a variety of shady individuals. They are aided in this by Nabeshin, a dealer who supplies them with an item to assist them, which usually leads them to more trouble. 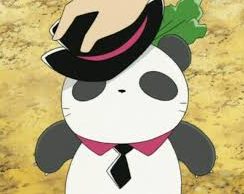 Nerima Daikon Brothers is a very strange series. It is a musical, which sets it apart as the characters will break into song to express themselves, although it does get a bit repetitive after a while.

It is also packed with wildly inappropriate sexual references, most of which are animated in way too much detail, for example, Ichiro having his crotch fondled while he sits and sighs next to a plate of hot dogs, or announcing that his is a giant member, while dressed as a cucumber. 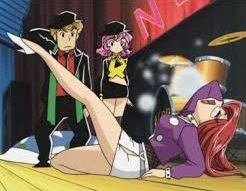 It’s not a bad watch, and there are plenty of clever parodies, which are unfortunately a bit dated now, but it is for the most part more irritating than funny and the music, which seems like a novelty at first, pretty much makes you want to punch someone after a while. It won’t be for everyone, but if you’re after something a bit different, this is it.

Nerima Daikon Brothers is available to buy now on DVD.