4 stars, the Iwatobi Swim Club are back! 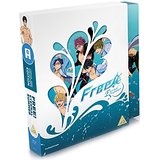 Free! Eternal Summer is based on the light novel High Speed! by Kōji Ōji  and produced by Kyoto Animation (K-On!!, Clannad) and Animation Do. It is the sequel to the highly popular series Free! – Iwatobi Swim Club.

“Join us and become a more muscular you!”

It’s the start of a new school year and the boys from the Iwatobi swim team are keen to get back into the pool and to try and recruit some new members, as they currently only have four. 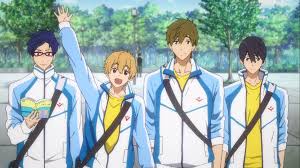 The Samezuka team is much bigger than theirs and just to make it more difficult, Iwatobi only has an outdoor pool and so cannot practice during the winter months. 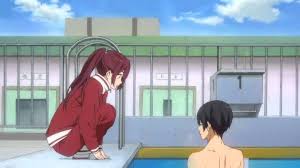 However the team manager Gou (Jamie Marchi – Brynhildr In The Darkness) has a nice surprise for them. Their coach, Goro (Christopher R. Sabat – One Piece, Dragon Ball) has finished renovating the local pool and is prepared to let them use it until the weather turns, giving them a valuable head start with their training.

With various regional heats to compete in and progress through, they must work harder than ever to achieve their goals of reaching the national competition and with graduation looming for some of the team there are a number of important decisions to be made. 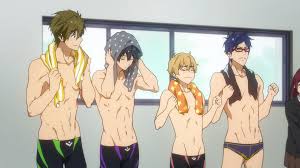 Free! – Eternal Summer is a very entertaining series and given that is is essentially just a load of people swimming it is strangely compelling. The animation, especially the water, is absolutely stunning and enhances an already good story.

This is definitely one for the ladies, instead of all the usual heaving bosoms and gratuitous panty shots, this one is all pert buns and rippling muscles. Lovely! Good fun and well worth adding to your collection if you’re a fan of sporting anime.

“We either get naked or disband the team! Which of those options do you think is worse?!”