4 stars for this exceptional but unusual sporting 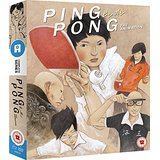 Ping Pong: The Animation is based on the Manga written by Taiyō Matsumoto (Blue Spring) and features his trade mark unconventional and slightly surreal style of drawing. It is adapted to anime by the Tatsunoko Production Studio.

“I’ve never seen him this way. It is spring, maybe he’s in heat.”

Despite their massively different personalities, they have always got on well, and the two of them have trained together since they were children, under the expert gaze of Obaba Tamura (Pam Dougherty), who runs the local Dojo.

Now of an age to enter competitions, they are up against the other local schools, who have some exceptional players, most notably Ryuichi Kazama (Marcus Stimac – Tokyo ESP), known as the Dragon, the previous champion. They also have to face Kong Wenge (Alan Chow), known as “China”, a former player for the Chinese national team who is trying to climb back to the top. 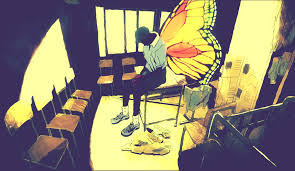 Peco has an unfortunate tendency to give up when he feels he’s beaten and Smile just doesn’t have a competitive bone in his body. It is up to their coach “Butterfly” Jo Koizumi (Mark Stoddard – Jormungand) to help them overcome their emotional and psychological issues and find their true potential. 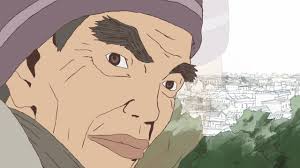 Ping Pong is unlike any other anime I have watched. The animation style is highly unusual, crude at first glance, but with a sense of perspective and observation which make for extraordinarily compelling viewing. Coupled with a very clever insight into sports psychology, this is a series that any sport fan will enjoy.

I was dubious at first, as I’m not much into table tennis, but this goes far beyond that, with clever twists and turns and amazing use of visuals which, side by side with a great script,  convey the story far better than you might expect.

A great watch which would grace the collection of any anime or sports fan.

“A coach’s job has no purpose without a great athlete to train. Don’t you want to be the protege who defines my twilight years?”