3 stars for this tale of aliens and witches. 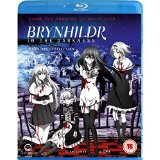 Brynhildr In The Darkness is based on the Manga by Lynn Okamoto (Elfen Lied) and adapted to anime by the studio Arms Corporation. The story is based on German mythology.

When Ryota Murakami (Blake Shepard – Penguindrum, Chaika: The Coffin Princess) was a young boy, his best friend was a girl called Kuroneko. 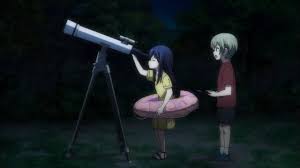 They were inseparable and spent many hours with a telescope, practising her love for astronomy and the sky. She also passionately believed in the existence of aliens, claiming to have seen one herself.

One day, a trip to show the alien to Murakami goes terribly wrong when he slips, Kuroneko tries to catch him and he falls, taking her with him. Murakami is hospitalised for months and Kuroneko is killed, although her body is never found.

Ten years on, Murakami is getting on with life, but he still carries the guilt of that day. Now, he honours her memory by watching the sky for signs of alien life, trying to prove her right and has become the sole member of the school’s astronomy club. 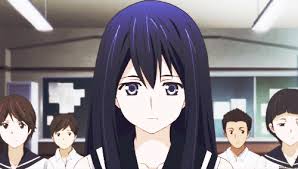 Things get quite confusing for him one day when a new transfer student arrives in his class. Her name is Neko Kuroha (Jamie Marchi – Tokyo ESP) and she bears a striking resemblance to Kuroneko. At first he is convinced it is her, but she lacks her distinctive birthmark. however, he is still drawn to her.

While he’s at the observatory after school, she comes to him to warn him that he is going to die. He doesn’t believe her, but when he is almost killed in a landslide and she comes to his rescue using superhuman powers, he is forced to concede that she isn’t entirely human.

She tells him that she is a witch, one of many who have escaped from an experimental laboratory and are now on the run. They are entirely reliant upon pills given to them at the laboratory to survive, without them their bodies simply break down. 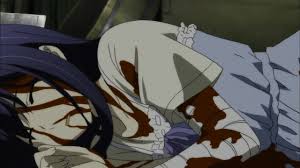 He soon starts to meet the others, including Kana (Christina Stroup), Kazumi (Emily Neves – Samurai Bride) and Kotori (Jessica Calvello – Attack on Titan). Mainly due to her resemblance to his childhood friend, he decides to help her and her friends and try to find more pills to keep them alive. This puts him in great danger and they are soon pursued by powerful witches sent by the lab.

Brynhildr In The Darkness is a bit of a strange one. The story is pretty good (although the resemblance to Elfen Lied is undeniable), but the characters don’t feel particularly well developed. There are various things left unexplained and it feels like a bit of a cop out. 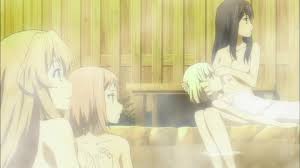 There is also far too much harem action, which  completely shifts the focus away from what should be the whole point of it, a sci-fi horror which should be taken more seriously than it is.

All in all it’s not a bad watch, the animation is nice and if you are into sci-fi it is a decent story worth adding to your collection.

“About ten years ago, I made two mistakes that I’d never be able to forget. The first mistake was, I should have turned back. And my second mistake, I don’t know why, I grabbed her hand and she went with me, all the way down.”

Brynhildr In The Darkness is available to buy now on DVD and Blu-ray.