5 stars for this fantastic adaptation to live action. 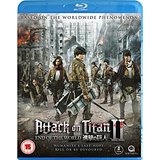 Attack on Titan: The Movie – Part 2: End of the World is adapted from the hit Manga series written and illustrated by Hajime Isayama and the hugely popular anime by Wit Studio and Production IG (Guilty Crown, Psycho Pass).

The usual spoiler alerts apply here; this is part two, so make sure you have watched part one before you read on!

Attack on Titan is set in a world where mankind are very much on the back foot. They now share the planet with Titans, enormous humanoids who feed solely on humans.

Following the loss of the outer wall and the subsequent failed mission to regain the lost territory, Eren is now standing trial and is rescued from a firing squad by the arrival of another seemingly intelligent Titan, who disappears with him.

With the explosives lost, the team of cadets decide to try and get to the dud bomb from the agricultural land and use it to detonate part of the wall to fill the gap left by the giant Titan.

The acting is excellent, the standout performance being Satomi Ishihara and the utterly bonkers Zoe Hange, an absolute delight to watch.

This is another excellent film, packed with action, gore and no shortage of stunning revelations. Fans of the anime will certainly enjoy this, but don’t expect the same story line because it most definitely isn’t. 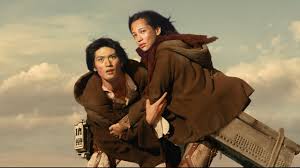 There are more shocks in store even than in the first film and that is saying something, as they find out the truth about the nature of Titans, and of humans and how all this started in the first place.

This is a must own for any fans of Attack on Titan, and if you aren’t there yet, why not?! Well worth adding to your collection.

Attack on Titan: The Movie – Part 2: The End of the World is available to buy now on DVD and Blu-ray and will be released on 25th July 2016.