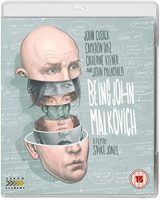 Well Would You Want To?

When writer Charlie Kaufman (Confessions of a Dangerous Mind, Eternal Sunshine of the Spotless Mind) penned a story back in ’94, he never thought it would become the 1999 surreal fantasy Being John Malkovich. After it was refused many times it ended up in the hands of video short/documentary director Spike Jonze (Where the Wild Things Are, Adaptation.) who took it and ran with the crazy idea all the way to be nominated in three categories in the 72nd Academy Awards. Now Arrow Academy bring us the restored film with a plethora of special features (see below banner).

Times are hard for expert puppeteer Craig Schwartz (John Cusack, Grosse Pointe Blank, Bullets Over Broadway) who cannot get any work, even when he street performs it normally all goes wrong. He heads home to his dowdy pet-obssessed wife (a cat, dog, cockatoo, chimpanzee) Lotte (Cameron Diaz, There’s Something About Mary, Vanilla Sky) who says that he should find an normal job, one that would suit his skill-set. He is not enthusiastic with the idea, but he seems to be mocked on all sides especially when he sees his main rival Derek Mantini (Ned Bellamy,  Saw, Django Unchained) get all of the limelight.

Searching the ads he finds just what he needs, a job for a file clerk and with his dexterous fingers it is just the job for him so he puts his best clothes on and heads for floor 7½ of the Mertin-Flemmer Building in New York City to see a Dr Lester (Orson Bean, Anatomy of a Murder, Innerspace). First he has to find floor 7½ and then Dr Lester’s assistant Floris (Mary Kay Place, The Breakup Girl). He gets the job and now he has to deal with floor 7½ and his co-workers including his instant crush Maxine Lund (Catherine Keener, Bad Grandpa, The 40 Year-Old Virgin).

She wants nothing to do with him however much he tries, until one day he loses a file down the back of a cabinet and when he moves everything out of the way, he finds a tiny door. He soon finds out where it leads, into John Malkovich’s head and he can see and hear everything Malkovich does. But fifteen minutes later he is ejected and appears by the New Jersey Turnpike.

He rushes to tell Maxine and they eventually come up with a plan to sell time in Malkovich’s head, for a fee of course.

All this leads to some very strange events and attractions between all mentioned and someone has a bigger plan for Mr John Malkovich, which has to be seen to be believed.

Weird, bizarre, fantasy, comedy these are all words that lightly describe Being John Malkovich, but well worth a watch what ever your views.

Being John Malkovich is available on Blu-ray.

Restored from a 4K scan of the original camera negative and approved by director Spike Jonze
High Definition Blu-Ray (1080p) presentation
Original 5.1 DTS-HD master audio
Optional English subtitles for the deaf and hard-of-hearing
Select scene audio commentary by Jonze s friend and competitor, the filmmaker Michel Gondry
John Malkovich and John Hodgman, a conversation between the film s star and the actor, writer and humourist
Strung Along, a new featurette exploring the marionettes made for the film, featuring newly shot interviews with puppeteer Phillip Huber and puppeteer/designer/fabricators Kamela Portuges and Lee Armstrong
The 7½ Floor, the full corporate orientation video seen in the film