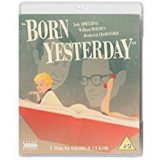 George Cukor’s (The Philadelphia Story, Gaslight,  The Marrying Kind, My Fair Lady) 1950 Born Yesterday has been given the Arrow Academy treatment and can now be enjoyed in Blu-ray quality. Born Yesterday is from an era when domestic violence was just a part of life rather than being reviled as it is today. 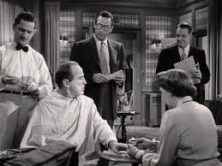 Harry Brock (Broderick Crawford, All the King’s Men, Human Desire)  breezes into Washington with his fiancée ‘Billie’ (Judy Holliday, Bells Are Ringing, It Should Happen to You, The Marrying Kind) and his right hand man cousin Eddie (Frank Otto, Idol of the Crowds). He arrives at a swanky hotel where he has a floor booked but to his annoyance he only has a wing reserved. He ignores the hotels manager and all his apologies and just wants to freshen up before his meeting with a congressman (Larry Oliver) that his lawyer Jim Devery (Howard St. John, Three Coins in the Fountain) has greased up.

Harry is in the junk business, getting it cheep and passing it on and he has made a fortune doing so, but he wants to make it bigger and to help with that he has begrudgingly agreed to do an interview with reporter Paul Verrall (William Holden, Stalag 17, Sunset Boulevard, Escape from Fort Bravo). He is an intelligent man and he doesn’t like Brock’s uncouth demeanour and how he treats Billie, a Chorus girl he rescued seven years ago when they got engaged.

Despite his question Harry likes Paul and his directness and he tells Paul that he can only help him, not harm his reputation. He now has to get ready for the 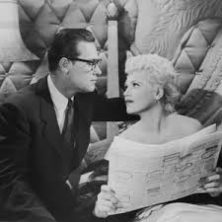 So he employs Paul to educate Billie and make her the woman that he can present to the world, even though he is far worse than Billie.

That is when the real fun begins, Born Yesterday is a great comedy of the day and is still funny today but the subject matter in Harry’s character is not of today’s comedies. And the scene of Billie and Harry playing gin rummy is just comic genius. 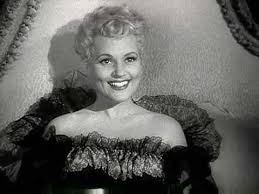 Born Yesterday is available on Blu-ray