3 Stars for the Hero From Planet Baab 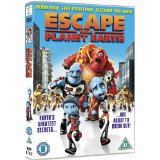 Escape From Planet Earth comes from the pen of Cal (Callan) Brunker and this is his first major film. He has worked on some big films as a storyboarder and the influence of those films show in this one, (Despicable Me, Ice Age: Continental Drift).

Corddy, Warm Bodies) both work for BASA based on Planet Baab and Scorch is the Planets hero, he goes around the universe doing daring rescues of people and little blue babies from their enemies, the fierce Gnarlachs. He is victorious, mainly because Gary is behind the scenes giving him the edge over the enemy.

(Safia Vergara, Machete Kills) and you can see the affection between them but they cannot show it on camera. Back at Gary’s house, his son Kip (Jonathan Morgan Heit, Date Night) really dotes on his uncle and wants to be a ‘Scorch’ rather than the button pushing ‘stay in the office’ worker like his father.

Soon a call from the Boss of BASA, Lena Thackleman, (Jessica Alba, Sin City) comes through to Scorch and Gary that an SOS has come through from the “Dark Planet” (Earth), a place that is infamous in that no species of alien has ever returned from their first contact mission. Gary sees this as a mission too far and argues with the conceited Scorch. The argument gets heated and eventually

Gary quits BASA before Scorch can fire him. By the time he gets home to his wife Kira, (Sarah Jessica Parker, Sex in the City) he finds out that Scorch is already Earth bound and the rescue mission is going to be beamed back to Baab for all his adoring fans. But soon things outside the 7/11 go wrong, even with the power of his suit Scorch is captured by the Hazmats and the General Shanker, (William Shatner, Star Trek…). This upsets Kip who, wanting to be a Scorch, immediately decides that he will rescue his hero, but Gary is against it and won’t do it himself. He sends Kip to his bedroom, but soon after decides that he was wrong and goes to apologise, but Kip is gone and there is only one place he can be. Kira dons a pair of rocket boots and they fly off to BASA. 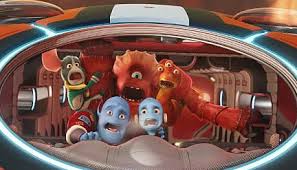 When Gary arrives on Earth and ends up at Area 51 he finds that all the other aliens are either kept in tanks or they are used to produce high-tech equipment for the humans, to gain their freedom, but this is never going to happen as Shanker has Lena believing that he is in love with her, and she will send him a life time supply of the most powerful substance in the known universe “Blutonium”. Can the assembled crew of aliens Doc (Craig Robinson, This is the End), Io (Jane Lynch, The 40 Year-Old Virgin) and Thurman (George Lopez, Balls of Fury) stop the General who wants to destroy every alien planet because aliens are dangerous as the greys unintentionally killed his father back in 1947.

This film is definitely one for the younger viewers as it smacks of being pretty samey as other films that have been around recently. The characters are well likeable and the film flows along nicely.

It will fit well on the shelf but you may get fed up of hearing it after a while.