4 Star Natsu and the Fairy Tail on the Flip-side. 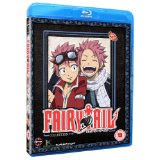 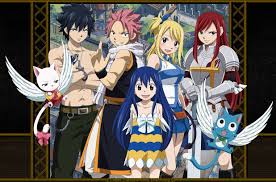 out on a mission to retrieve a very rare herb located high on a snowy mountain. The moods are good as they could be with this lot, talking about the annual flower watching celebrations as the cherry trees bloom and at night they glow in rainbow colours, as the  girls moan about the cold until Lucy summons Horologium where she and Wendy can ride 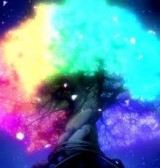 out the climb, lead by Natsu’s nose to the white wyvern protected herbs at the summit. But this endeavour leaves Lucy feeling unwell and unable to attend the ceremony even after Wendy’s healing. This leaves Natsu in the doldrums, he cannot enjoy the event whilst Lucy languishes in bed, so he and Happy do something about it.

The next few episodes show the lighter side of 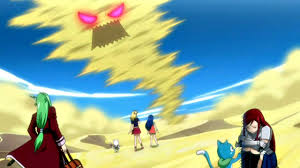 the goings on in Fairy Tail Guild, with Wendys first big job where she and Freed head to Onibus to work for the old troupe that once employed the gang, their is also the 24-hour endurance road race that sees everybody racing to avoid Master Makarov’s punishment game for coming last. 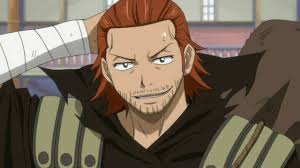 Then the guild gets word that their greatest wizard and most clumsiest, Gildart is returning after three years into a century long quest. Natsu has known Gildart since he was a young boy and he thinks of the powerful wizard as a father figure, and get on well, even when he tells Natsu that on the quest that he has just failed, he came across a pitch black dragon that nearly took his life and that might mean that Igneal might still be out there.

The start of the arc sees Wendy finally meeting Mystagon the person she knew as Jellal when she was a young girl. Mystagon warns Wendy to leave Magnolia immediately as he can no longer hold back the Anima and it is about 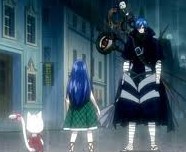 to destroy all of Magnolia and Fairy Tail along with it. As the huge black cloud circles above the city buildings start disappearing as Wendy refuses to leave and heads for the guild to warn her friends but as she gets to the gates a great flash of light blinds us and when it clear all is gone.

Only Wendy, Carla, Natsu and Happy remain. This is where Carla reveals that the reason they remain is that Wendy and Natsu are Dragon Slayers and they are considered a threat to the people of Edolas, the place that everything has been taken to. The place that Happy and Carla originally came from. 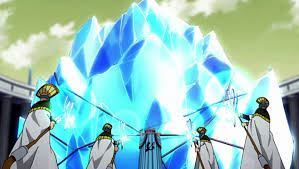 Edolas is short of magic and its ruler Faust will stop at nothing to give his subjects the magic that his people crave and wizards from Earth side are turned into blue crystal call lacrima that can be used to power magical items. The intrepid two wizards are taken to Edolas, where they find a totally different world, where islands float and rivers fly. They soon find that the locals aren’t that friendly to Fairy Tail wizards. 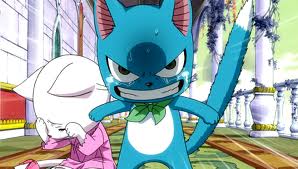 That’s where the fun begins in the Land of Edolas as they vow to save their friends trapped in this world.

Another great addition to the Fairy Tail collection as much is now being revealed about who is really whom and the missions they are on. 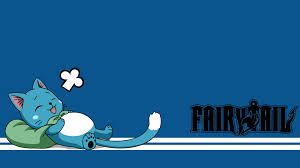 Available to Buy on DVD and Blu-ray on the 28th April.