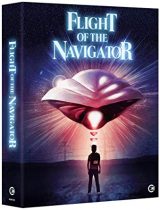 It doesn’t get more 1980’s than this brilliant Sci-Fi romp from writer Mark H. Baker (Lifeform) and given to the director of family favourites such as Grease, The Blue Lagoon, White Fang, Honey, I Blew Up the Kid (Randal Kleiser). When CGI was young this blew us away and now thirty odd years later it still stands tall. Sit back open the popcorn and enjoy.

Florida 1978, the July 4th celebrations are in full swing and the Freeman family are enjoying watching the dog Frisbee catching championship. Their son David (Joey Cramer, Runaway) is twelve years

old and he has aspirations for his young dog Bruiser to be a champion one day. David’s arch rival is his little eight year old brother Jeff (Albie Whitaker) who on their way home wants to go play at his friends house. His parents Bill (Cliff De Young, The Craft) and Helen (Veronica Cartwright, Alien, The Witches of Eastwick) say he has to be home before dark (the standard for those days).

Later it is getting dark and no sign of Jeff so Helen asks David to go with Bruiser and walk Jeff home. With complaints quelled David does as he is asked and heads across the train tracks and through the woods.

With a creepy passage through the woods when he starts hearing noises.

Then Jeff jumps out on him and runs off, David is about to chase him when Bruisers bark distracts him and he goes to investigate. He finds a ravine, deep and dark and as he peers into the darkness he loses his footing and falls, knocking himself out.

Later he awakes and heads home expecting to give Jeff a roasting but the door is locked and when the door is opened it isn’t any of his family in the house.

He is taken to the police station where they try to work out who he is and when they find a missing persons notice describing David perfectly, they think they 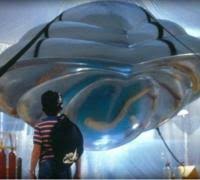 Near where David fell there is a power outage and when NASA security turn up the security guard has found a crashed ‘satelite’ . Dr. Louis Faraday (Howard Hesseman, Halloween II) might just have found the start of his life’s work.

“Sure is a pretty piece of spacelab.”

David is still twelve years old and eight years have gone by, how could this be possible? May be NASA can help.

Can David’s mystery be solved or is he going to be Jeff’s (Matt Adler, Teen Wolf) big little brother? Flight of the Navigator is all round family fun and with all the extras (see below) you can fully immerse yourself in the 1980’s vibe.

Flight of the Navigator is available on Limited Edition Blu-ray