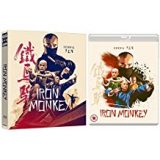 Eureka Classics bring us a martial arts extravaganza as Donnie Yen (Chasing the Dragon, Rogue One, Ip Man 1-3) relives the tale of Wong Kei-ying and his son Wong Fei-hung who became martial arts legends in the late 19th Century.

A small town in China is run by Governor Cheng Pak-Fong (James Wong, Twin Dragons) who has a bugbear, the Iron Monkey a vigilante who robs from the rich and distributes his ill-gotten gains to the poor and refugees that have flooded the area. The task of catching him is given to General Fox (Shun-Yee Yuen, Scorpion King) and his band of bungling subordinates, whilst the

governor works out more ways to increase his wealth without the Iron Monkey finding it.

The Iron Monkey flies through the air at night, fighting corrupt monks and the town guards, but during the day, instead of laying low and hiding he hides in plain site as Dr. Yang (Rongguang Yu, Police Story: Lockdown, The 18 Shaolin Golden Boys)

a herbalist that gives prescriptions free to the poor but charges heavily to the rich. He also treats the guards for cuts and bruises he dealt out the previous night. His disguise is even better than Superman’s.

In the meantime, Wong Kei-ying, (Donnie Yen)also a physician and martial

artist arrives in town with his son Wong Fei-Hong (Sze-Man Tsang, Guo chan xue ge wei long) and their umbrella (that will become useful later). It is obvious that they are new to the town and the local pickpockets and thugs are soon on them when Wong catches the pickpocket. A fight soon ensues and the gaurds are so impressed with Wong’s martial arts they believe is must be the Iron Monkey and arrest him along with anyone who has a connection to a monkey.

The governor says they will all be thrown in prison or branded if someone does not confess to the crimes. But just as things are about to turn nasty the real Iron 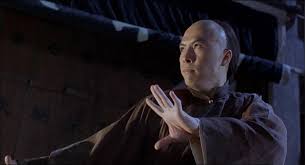 Monkey shows up and taunts the guards as they try to bring him down. Wong chases after him to save his son and the other innocents. A big fight between the two experts pans out across the rooftops, but eventually the Iron Monkey makes his escape.

Afterwards Wong vows to capture the villain to secure the release of the others, except the governor will keep his son in prison until the job is completed.

How will Wong save his son? This is the question, as we see it all pan out in lovely 1080p another great package from Eureka Classics.

A must for a Donnie Yen or Martial Arts Fan.

Iron Monkey is available on Blu-ray