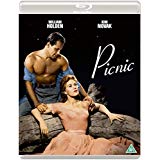 Eureka Classics bring us a true classic in this 1956 Academy Award winning film. Risqué at the time of release but nowadays you would see more on a Friday night soap opera. Taken from the stage-play by William Inge of the same name, and Joshua Logan (Sayonara, South Pacific, Paint Your Wagon) takes this tale of wants and regrets and turns it into a steamy sauna of tension and desires.

Kansas on a blistering hot day, the sound of a trains horn shrieks out into the crystal blue air, as the train comes to a halt and a box car door slides open to reveal our star. Hal Carter  (William Holden, Born Yesterday, Stalag 17, Omen II: Damien) has returned to his roots, a man that grew up on the wrong side of the tracks, with a father that cared for the bottle more than he did for his son.

Travel tired and dusty he needs to earn some money to get food and he needs to find his old college room mate Alan Benson (Cliff Robertson, Escape from L.A., Spider-Man) whose father owns the local grain storage silos that dominate the landscape of this town.

He makes his way into town where he finds a yard that could do with some tidying up and finds Mrs Potts (Verna Felton, Alice in Wonderland, Lady and the Tramp, Sleeping Beauty) who offers him pie for breakfast, before starting burning the trash in the back garden. This is

(Rosalind Russell, His Girl Friday, The Feminine Touch, The Velvet Touch) a teacher at the local high-school, who is enjoying the last few days of the summer holidays.

Hal is in luck as Madge is Alan’s beau and he is mad for her, much to his fathers annoyance as he believes the girl that works in the dime store is way beneath

the Benson family. On the other hand Madge’s mother Flo encourages her daughter to make sure Alan pops the question at the annual Labour Day picnic.

But throw a virile Hal into the mix and things soon get hot under the collar. Watch as prejudices emerge, desperation surfaces and nature and nurture collide. Great supporting performance from Arthur O’Connell (Anatomy of a Murder, The Poseidon Adventure) as the hen pecked Howard Bevans

Picnic is available on Blu-ray