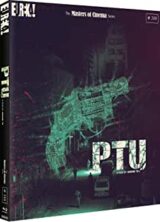 One Cop, One Gun, One Deadly Night.

Seasoned director Johnnie To (Election, Election 2, Mad Detective, Exiled) brings a Hong Kong tale of how one little mistake can easily start a string of events that totally change the participants lives forever, in this cop loses his gun story Hong Kong style.

PTU (Police Tactical Unit) are a division connected to the Hong Kong Police who are well-trained in their use of firearms, and they patrol the streets as word comes over the radio of another heist and gunfire.

He’s right! This uniform makes us all family.

Meanwhile, across town Ponnytail (Chi-Shing Chiu, Election, Election 2) and his four thugs walk into a diner and take-up their seats much to the bewilderment (red shirt) of one of the patrons. These guys are well known to the

proprietor, and they get preferential treatment over the other customers. Ponnytail is the son of local triad boss Kingpin, so District Anti-Triad

Squad Sergeant Lo Sa (Suet Lam, A Busy Night, The Legend Is Born: Ip Man) knows all about Ponnytail and goes to join them, much to the annoyance of Ponnytail.

After a few comical moments as everybody has the same ringtone on their phones, we get down to business, and we see one of Ponnytail’s men key Lo’s car and then runs off with Lo in pursuit, but he is a streetwise cop, and he knows the rest of the gang will be lying in wait for him, so he grabs

a hefty stick and heads round behind them, only to fall foul of a discarded banana skin. D’Oh! Our intrepid cop comes a cropper as the gang vent their frustration on the Sergeants body, which results in a lot of bruising and the loss of his service revolver.

The PTU has Sergeant Mike Ho (Simon Yam, Lara Croft Tomb Raider: The Cradle of Life, Ip Man) at its head, and he is quickly on the scene to see the dishevelled Lo who tells him about his lost revolver.

If we help we can find it, we’ll give you till dawn.

a few squabbles whilst trying to retrieve Lo’s weapon. Including CID Inspector Leigh Cheng (Ruby Wong, Running Out of Time, Killing Me Tenderly) who doesn’t trust our unlucky cop.

PTU is a dark look into the police force and the goings-on after the shops close up for the night in the city of Hong Kong. Not to mention the murder of the Kingpins son, oh what a night is coming.

PTU (masters of Cinema) is available on Blu-ray