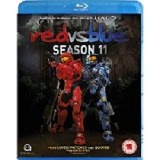 The web series that is still going from strength to strength from Rooster Teeth Productions. With nearly eight million online followers this Blu-ray should be well received by the fans and it should also be by newcomers, (as I am). This is a series that has it’s tongue firmly wedged in it’s cheek of the Halo Universe, and with Halo 5: Guardians announced this is a great lead up to the release.

Red and Blue teams have managed to be the only survivors of the crash of their massive space ship on what appears to be an uninhabited planet somewhere in the Universe. They have managed to set up their two camps at either end of a deep canyon, as usual they are red and blue and that means they are not the same they are rivals in all things, against each team and each other, with colourful language thrown in at as many opportunities as possible.

Stranded they need to contact the outside world so first they have to build and operate a satellite array, Wash (Shannon McCormick, RWBY) takes control of the Blue squad whilst the paranoid Sarge (Matt Hullman,Coide Monkeys) runs the red team and he has issues with the living accommodations much to the annoyance of Simmons (Gustavo Sorola, Ten Little Roosters) and Grif (Geoff Lazer Ramsey, The Strangerhood). Whilst Wash is fervently trying to keep Tucker (Jason Saldaña, Rooster Teeth Shorts: Volume One) and Caboose (Joel Heyman, RWBY) in fighting readiness with constant drills and training, much to the annoyance of the blue team members. 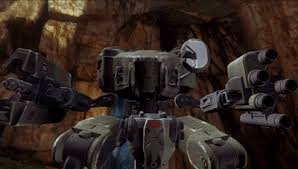 With general grumblings about daily chores and the afore mentioned living arrangements there are plenty of things to entertain the stranded men, (such as tanks and gun mounted vehicles). But it is when Caboose (who was suppoesd to be on training comes back to the camp with his new pet Freckles (Shane Newville, RWBY) his a Mantis Class military Assault Droid, which leads to a change in command. The reds spy on the blues

and they are jealous of the other teams new acquisition, so with a rummage in the wreckage they build Lopez and Lopez 2.0 (McCormick) a Spanish speaking droids that take the mick out of Sarge and the red team.

There are plenty of fun to be had with this series, whether you are a seasoned vet or a wetnose new recruit. The hapless bunch must fight their worst enemy, themselves, will they survive to get rescued or will some go AWOL or take one for the team.

This great fun and I don’t want to spoil it for you, so dive into the haphazard universe of Red vs Blue. Plenty of Laughs to be had. 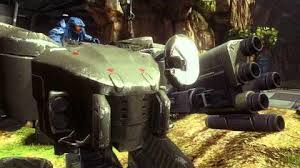