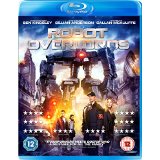 With his third full length feature film writer/director Jon Wright (Grabbers) brings us a new Sci-Fi tale, where it is Robots who have control of Earth. This is billed as a independent film, but with a healthy estimated budget of £13.5 Million #SupportIndieFilms #indiefilms we should be in for a treat. We at RRR know a lot of Indie filmmakers that would snap your hand off for a fraction of that budget.

Gillian Anderson (Continuum, Moby Dick TV Mini Series, The Fall, Mr. Morgans Last Love) and Sir Ben Kingsley (Ghandi, Ender’s Game,) most probably take up a fair portion of that budget, along with all the CGI that should take care of the rest.

Three years have passed since the eleven day war that followed the arrival of the Robots, who have crossed the Galaxy studying the planets that they conquer. They allow the inhabitants to live, but there is one condition, they must stay indoors at all

times.To ensure this, every single human is fitted with an implant located behind the right ear. When you go outside, the implant changes and alerts the sentry robots that roam the streets freely. This what happens to Connors dad as he goes stir crazy and wants to confront his captors, with just ten seconds to comply it doesn’t end well, as Connor (Milo Parker) sees his father disintegrated right in front of him.

Witnessing this event is ex-teacher Kate (Anderson) and her son Sean Flynn (Callan McAuliffe, Beneath the Harvest Sky). They try to encourage the grieving child to get to safety as the countdown begins to get close to zero, but at the last instant a voice rings out to cancel. This comes from one zone chief Robin Smythe (Kingsley) 97ZCRS, a human that works for the robots and help 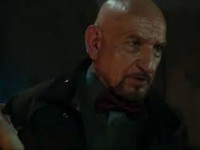 keep order via a human face, but everybody treats him as a collaborator.

Whilst everybody concentrates on getting by, Sean believes his missing fighter pilot father is still alive, even though Smythe says he is dead. His efforts are brought a new lease of life as whilst trying to fix their games machine, Nathan is shocked and thrown across the room. Fearing for his safety, Alex tries to revive him and notices that his implant has been turned off. Thus meaning an outside life. When he comes around it is still off, so they all try it and all the implants turn off.

Whilst on one of their clandestine excursions they try to find Sean’s father’s file, but things goes

wrong and they are captured by Smythe. He paces Sean in the DBS (Deep Brain Scanner) Smythe removes the implant and replaces it with one that syncs with the robot super-computer interface. But he manages to rile Smythe who breaks the circuit leaving Sean with a new strange ability.

Can our band of vigilantes escape the clutches of Smythe,

the Human Liaison Mediator 452 (Craig Garner, Snow White & the Huntsman) and the myriad of robots?

It is a great romp for the robot lovers amongst us, I like the idea of the story and the CGI is great (as it should be these days), and Anderson and Kingsley play the parts well but the hat goes off to newcomer Milo Parker.