A Heart Attack, Stress and Deaths.

From Delirium comes a film by writer/director Mark Savage (Sensitive New Age Killer, Purgatory Road), a film with its tongue firmly wedged in its cheek as we take on the problems of stress and how it can affect a certain member of society. Now Stressed to Kill is out on Blu-ray courtesy of SGL Entertainment, they bring us this Comedy, Crime, Drama that keeps on giving.

Bill Johnson (Bill Oberst Jr., Zombieworld, Werewolf Rising, The Black Water Vampire) is stuck in traffic and no-one seems to give a hoot about it. When this movie fan gets to the video store there are two elderly ladies taking up his precious time as one repeats what the vendor has just said to the other lady. Having no luck there he goes to his local cinema to watch ‘Six Bullets for Barbara’. He is trying to get into the film but there are two guys looking at the bright screen of a phone. Bill politely complains but it falls on ignorant ears, so he leaves and goes back to work.

Bill works for the demanding Mr Lee (Alvin Aki, Legend of the Red Reaper) who sends him out replacing fire extinguishers and fitting fire systems. He turns up at an office block with some new fire extinguishers and Mr Lee is still phoning him with more work even though it is almost five O-clock. To top it off there is a woman on the phone giving it ‘this and that’ at the top of her voice in the elevator not noticing that Bill is in trouble.

It is all to much for Bill and when he has to breathe into a breathalyser to start his pick-up, you know he has been a naughty boy before. The next thing Bill is hitting the floor suffering a massive heart attack.

“There’s a lot of A-holes out there Doc, sometimes I can’t take it.”

“Be creative, I’m sure you’ll come up with something”.

But even Bills’ home life is stressful as his wife Vera (Sonia Curtis, Crimes of the Heart) works from home as a fitness guru and she always puts the pressure on Bill to live a healthier lifestyle, which he hates and resents.

It is two weeks later and he is in a restaurant with his best friend Stan (Marshal Hilton, The Bunnyman Massacre) who isn’t the sharpest tool in the box and with three ex-wives he is a big deal of trouble as his last one Thelma (Lynn Single, Billy’s Got a Bad Brain) is trying too sue him again. Whilst they are talking they can hear a young woman being dumped over the phone and Bill makes a very dark comment about her relationship status, which is noticed by Stan. That isn’t all as a man with a drink walks straight into Bill, spilling his drink all over Bill and

he doesn’t give a damn about it, that is the last straw for Bill who follows him out intending on giving him a piece of his mind. With a finger in the air the assailant carries on and is mowed down by an SUV and this puts a big old smile on Bills face and lowers his blood pressure.

Bill has a new vigour for life and death as he looks to his old love of travelling and the blow darts from the darkest jungles.

But with deaths mounting, the police will always be involved and when Detective Brent (Derek Roberts, Geostorm) introduces Detective Paul Jordan (Armand Assante, Judge Dredd, Striptease) to the crime scenes he puts a picture together that involves Stan and Bill and he is crazier than they are.

“As the Death Toll Rises, the Blood Pressure Drops.” 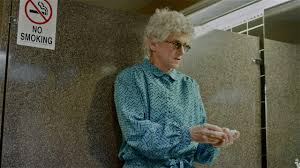 Stressed to Kill is available on Blu-ray (NTSC)