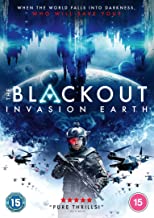 From the writer that brought us ‘Chernobyl: Zone of Exclusion’ (Ilya Kulikov, The Envelope) this time it is a full-on Sci-Fi set in Russia. Directed by Egor Baranov (Sparta) who brings this blood soaked fight for survival in the near future. The English version is directed by Nathalia Hencker (Por Sofia), the race is on to save all of humanity.

It’s dark and an army base is on full alert, as an unknown adversary crashes through the surrounding forest, at an alarming speed. Unknown and larger than humans, what could be coming their way?

and passengers fall down dead. The power goes out across the city, country and the globe, all apart from the Mega city of Moscow, and a few areas in Finland, Estonia, Latvia and Belarus. However, all communication is down and the planet is in the dark.

Back in Moscow life goes on as normal, knowing nothing about what has transpired. Oleg (Aleksey Chadov, No Love in the City, 9th Company) is in a restaurant having dinner with Alyona (Lukerya Ilyashenko, Dance to Death, Dance with Me) as life outside the forcefield windows goes on as usual. It is not until they are back at Oleg’s apartment that they catch the news and the fate of the planet.

Moscow sorts itself out and starts making inroads into the dark and building bases outside the ‘Circle of Life’, and what they find (those that manage to return) is death and destruction, but as they search through the buildings,  room by room press reporter Olga (Svetlana Ivanova, The Spacewalker, I Give You My Word) spots that one room is like the ‘Mary Celeste’.

Where are the bodies?

It appears that in all this death there is still life outside the CoL, and they seem

to have superhuman abilities. More recon teams are sent out and Oleg’s friend Yuriy Grubov (Pyotr Fyodorov, The Icebreaker, Sputnik) finds that the survivors are rising up against the CoL, and now the killing begins in earnest.

As thousands of bodies hit the floor it is obvious that these survivors are motivated, but from what or whom are they taking their orders and fervency for the destruction of the human life that survived the fate of the rest of the planet.

For every one survivor there are one thousand dead.

Throw in a new psychic and a couple of aliens this is a cracking Sci-Fi and the question is, are humans the plague that needs stopping?

The Blackout: Invasion Earth is available on DVD and Blu-ray

Behind The Scenes Making Of